The Four Rules of Gun Safety

There are four universally accepted rules for gun safety. These rules hold true for both civilians and police officers who handle firearms. You can expect to find these rules followed (and often posted) at any range or firearms facility you may visit.

1. All Weapons Are Loaded

Treat every firearm as if it is loaded until you prove it to be empty. The majority of accidental gun discharges are the result of people handling seemingly empty weapons.

When you pick up a weapon, you must clear the gun while pointing it in a safe direction. Clearing a weapon (verifying that it's empty) is a little different depending on the type of weapon you're handling. It consists of several deliberate actions to remove any ammunition and prove the weapon is completely unloaded. 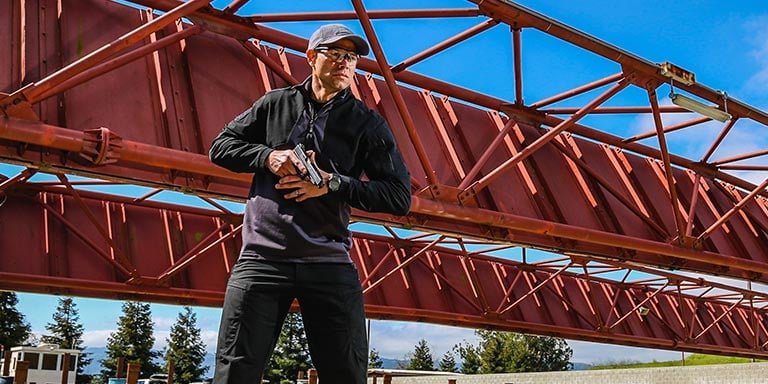 Never point the muzzle (the front of the barrel) of a firearm at anything you wouldn't shoot. While doing so is usually unintentional, it can be deadly. Muzzle discipline is a learned skill that must be mastered. In many cases, lack of muzzle discipline can happen when the shooter is moving the firearm from one direction to another. It's easy to unintentionally bring the muzzle across the path of another person. It is often a momentary hazard, but it will draw the immediate attention of any competent range instructor.

Think of the muzzle of your firearm as having a powerful laser beam shooting out the end of it at all times. Pretend that whatever the beam hits will be destroyed. Using that mindset will quickly help you master the skill of muzzle awareness and discipline.

There's another aspect of muzzle safety that applies in your home. You need to be aware that pointing a weapon in the direction of a blank wall or the floor may not be safe. Think about this: what is on the other side of that wall or on the level below where you are standing? With this in mind, it is wise to exercise an extra level of caution in your house.

3. Keep Your Finger off the Trigger until Ready to Fire

This rule is one of the most important, as a gun will not fire unless the trigger is pulled. There are two variations of this rule. One is more applicable to target shooting while the other applies to combat shooting. The target-shooting version is, "Keep your finger off the trigger until your sights are on the target." The shortened version is "On target on trigger, off target off trigger." This rule works very well for the civilian target shooter.

In law enforcement, the current trend is to teach officers that their finger should stay outside the trigger guard until they decide to shoot. Consider a police officer who has their gun drawn and pointed at a suspect in what is called a covering suspect position. In this situation, something may happen to startle the officer; it may be a car backfiring or someone grabbing the officer from behind. The chance of the officer unintentionally discharging their weapon in this scenario is significantly increased if their finger is on the trigger.

You will perform as you train. Many civilians train on the pistol range to become proficient with their firearm for home or self-defense. Under either of these high-stress situations, it's important to be as restrictive with your trigger finger as possible. Diligence with regard to this rule will help to prevent accidents while still promoting self-defense.

4. Know Your Target and Beyond

These are perhaps the two most difficult skills to master. If you are target shooting, it's quite easy to determine that your backstop is a massive wall of dirt (as in many outdoor ranges), or a blank wall of bullet catching material in an indoor range. In these circumstances, your biggest concerns are verifying no one is downrange and not shooting the target of the person next to you by mistake.

These skills are more difficult in stressful, rapidly evolving situations involving home defense, self-defense or the use of deadly force by law enforcement. With practice, however, you'll be ready to face these scenarios should they arise.

In a self-defense situation, ask yourself: is the threat posing an imminent danger of death or serious injury? Consider being awakened in the middle of the night to the sounds of an intruder moving about. You fire a round at the shadowy figure but miss — very fortunate for your family member who couldn't sleep. Know your target!

Consider what is to the left and right of the target. In combat shooting, while under extreme stress, shooters tend to get tunnel vision. They focus all their attention on the threat but pay little mind to the surroundings. Unless a shooter is in close-quarter combat where the threat is right in front of them, they have to consider potential civilians who are in the line of fire. Sometimes it's only a matter of taking a few steps to one side before having a clear lane.

Learning the basic safety rules for handling firearms is essential to any gun owner. Make these rules a part of each practice session and train yourself to follow them until they become automatic. Once you do, you will immediately be able to recognize when someone violates a rule. Your adherence to these practices will keep you and others around you safe and help you to demonstrate your commitment to responsible firearms handling and ownership.