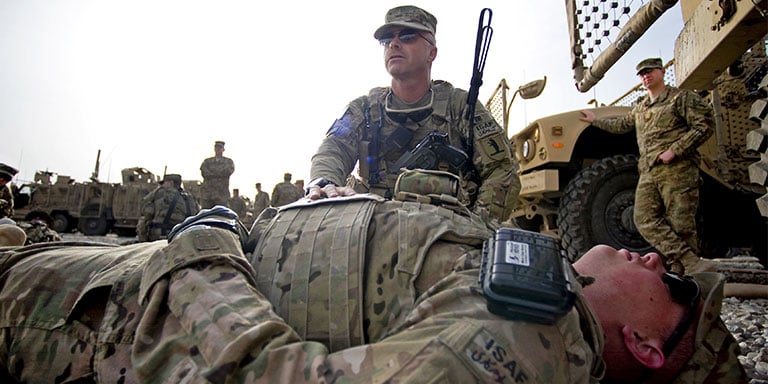 The primary focus of buddy first aid is to keep your partner alive and well. To do this, there are actions you must take immediately to prevent further injury or loss of life. Learning the correct techniques and procedures of buddy first aid could make all the difference out in the field.

What is Buddy First Aid? 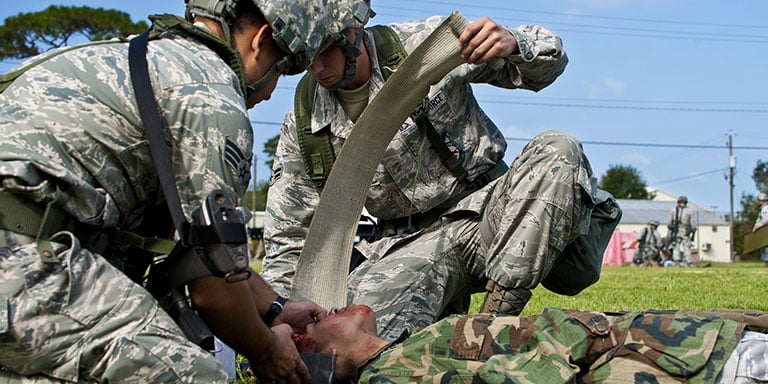 Buddy first aid includes the immediate, lifesaving measures performed for casualties by nonmedical personnel when medical personnel are not immediately available. In the context of military service, the term refers specifically to aid rendered during combat. Instances that require buddy first aid are very stressful and require quick decision making. It is important to deliver this aid as fast and effectively as possible before serious injury or death occurs.

In combat situations, suppressing the enemy is more important than the aid you can provide to the injured. Failing to suppress the enemy could lead to more injuries and compound the problem. Once the area is sufficiently secure, you will be clear to care for the wounded.

First, determine whether or not you need to move your injured buddy. Generally speaking, it is better to treat them where they are, but you have to determine if they are in danger in their current position. It is always better not to move an injured person if you can help it; moving them may exacerbate an injury you cannot see.

Next, try to determine their general status. If the injured person is conscious, ask if they're ok. If they aren't sure, ask where they feel different or what hurts. It's vital to quickly gather the most pertinent information. If your injured partner is unconscious, not breathing, or doesn't have a pulse, move on to another wounded person if there is one, and if your skills and training would clearly be more helpful to them. Otherwise, stay and render aid as best you can. 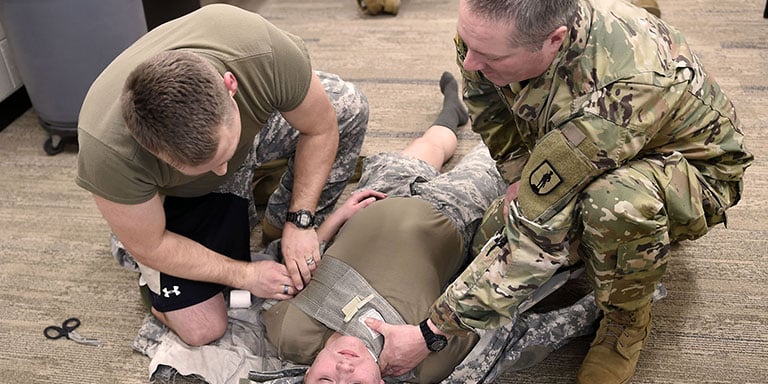 ABC stands for airway, breathing and circulation. It is critical to ensure your injured buddy maintains these vital functions until they can get help from medical personnel. While checking these functions, it's important to stay as calm as possible and help the injured individual stay calm as well. Remind them that you're there to help and that you'll take care of them. 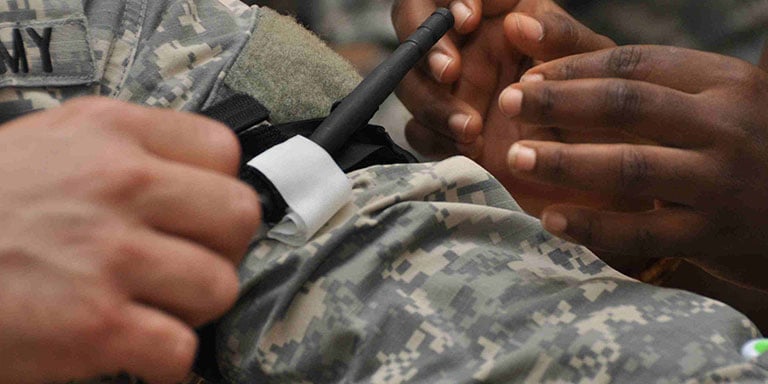 Though circulation is third in the acronym, it should be first on your priority list if there is obvious bleeding or if there isn't an immediate and serious airway problem. A casualty with arterial bleeding can die within minutes, so make sure to treat this issue right away. With supplies from your IFAK (individual first aid kit), you may be able to stop bleeding.

QuikClot
QuickClot is a hemostatic material, a chemical that promotes clotting. It is a vital combat tool and is standard in military first aid kits. QuickClot dressings are pushed into the wound cavity, not simply slapped on an injury. They come with instructions on their packaging, so become familiar with its application before you need it.

QuikClot also comes in powder form. If this is the form you have, simply dump the entire contents of the package directly and deeply into the wound.

After the QuickClot is in place, apply a pressure bandage on top of the wound. Repeat this process for any uncontrolled arterial bleeding on your injured squad member. If you don't have QuickClot, put your hand on the injury and push hard on it to stem the flow of blood. It is very difficult to stop arterial bleeding with pressure alone; putting an absorbent dressing under your hand will help. Use a t-shirt, a sock, a clean rag, or anything else you have handy that will absorb blood.

Tourniquets
In a situation where the wounded individual has lost all or part of a limb, a tourniquet is required. Be sure to take a Combat Application Tourniquet (or CAT, sometimes referred to as an Israeli Tourniquet) and tighten it around the limb until the bleeding stops. After you've applied the tourniquet, leave it there and let medical personnel remove it later.

Once you've treated the bleeding as best you can, wait for a trained medic to arrive and take over — you've done all you can with regards to bleeding. If your buddy is breathing fine, move on and treat another injured squad member. If they are not breathing, however, it's time to assess their airway. 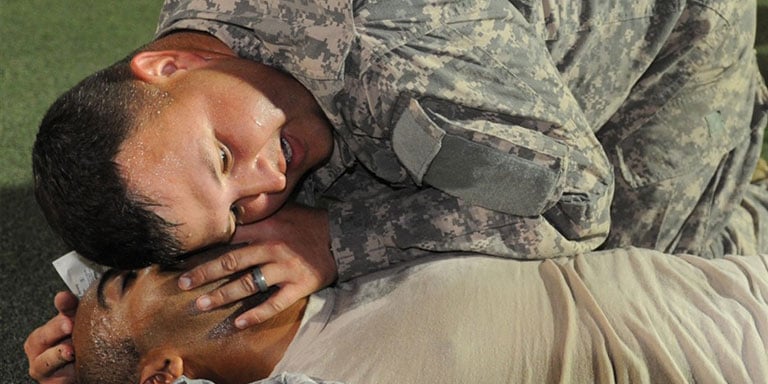 After bleeding, breathing generally is the next vital function to assess in your wounded partner. It is essential to keep oxygenated blood flowing to the brain and other organs. Otherwise, brain damage or death may result. There are several important steps to take to ensure the injured party is breathing (or to facilitate breathing if they aren't).

Carefully roll them onto their back
If your injured buddy is not already on their back, put them there. This will allow you to check their airway much more easily and to perform rescue breathing if you need to. Make sure you move them onto their back carefully, rolling the entire body without twisting it. Be especially careful to ensure their head and neck stay in line with the body. Don't try this without help from a second person if you suspect they have a spinal or neck injury.

Check the airway
In addition to watching for the rise and fall of the chest, place an ear close to your companion's mouth to determine if you can hear any breathing. If they are not breathing, immediately determine if their airway is clear. To do this, tilt their head back and open their mouth by using one hand to gently push the forehead back and the other on the chin to open the jaw. Don't do this if they do have a visible neck injury, as any manipulation can exacerbate the injury. In that case, use a jaw thrust maneuver: Position yourself at their head, facing toward their feet, and use your thumbs to open the jaw by pushing the sides of the chin downward. While doing this, use the other four fingers of each hand to hold the neck stationary. 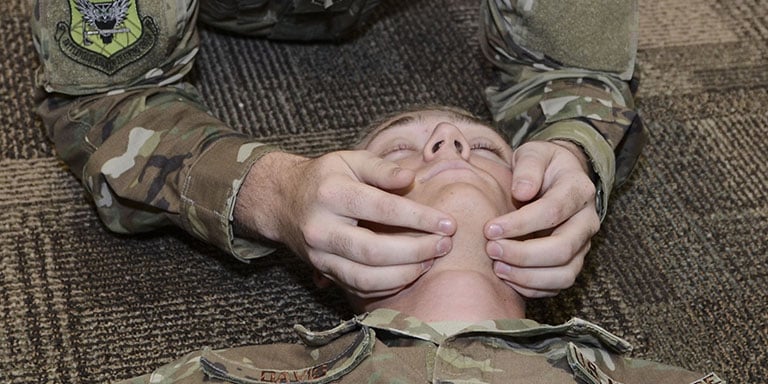 Abdominal thrusts
If they're conscious but cannot talk, they may have an airway blockage. Try performing abdominal thrusts to see if you can move the blockage. Don't use these thrusts if the injured individual has severe abdominal or chest wounds — unless the airway blockage is clearly a more immediate threat. In that case, try a finger sweep (see next section), but do your best to clear the airway by any means necessary; you'll have to prioritize and treat potential life threats one at a time, using your best judgment and to the best of your ability, given your particular level of knowledge and training.

Clear debris
If chest thrusts don't help with clearing the airway, use your fingers to check for and pull debris from their mouth and upper trachea. This could include dirt, chewing tobacco, vomit, gum, or any other substance. Be sure to check under the tongue (and note that the tongue itself can block the airway). If the situation permits, shine a light into their mouth for a better view of the throat. If they are unconscious, you may have no surefire way of determining if there is a blockage and should focus on chest compressions to keep the blood circulating.

Get them breathing
After the airway is clear, insert an oropharyngeal (OPA) tube from the IFAK into their mouth or nostril and start a rescue breathing method. If you cannot get the casualty to breathe on their own, perform rescue breathing until relieved by medical personnel — or stop and move on to the next casualty, if you judge that that's where your efforts are better spent. After the injured person resumes breathing, monitor them until medical personnel take over.

Hypovolemic shock occurs when the body is not getting enough oxygen due to a drop in blood flow. It's caused by a significant loss of volume in the circulatory system, which can result from internal or external bleeding. The most common symptoms of hypovolemic shock include pale skin, confusion, nervousness, nausea, and vomiting. Anyone you treat for severe bleeding must be preemptively treated for hypovolemic shock, even if they aren't yet exhibiting symptoms.

To begin treating hypovolemic shock, disarm the injured person and get them to lie down . Get their feet higher than their heart. If they are lying on sloping ground, put their head on the lower end of the slope.. Instruct them to avoid physical exertion and try to keep them from being overheated. Loosen or remove their clothing to improve circulation and to help them feel more relaxed.

Be sure to remain calm. If you show panic or confusion, it can feed the injured individual's stress and worsen their condition. Tell them you have the situation under control. Help others around them to remain calm as well. Keep anyone exhibiting uncontrolled emotions away from the person(s) you are treating for stress. Monitor their condition until you can turn them over to medical personnel for evaluation. 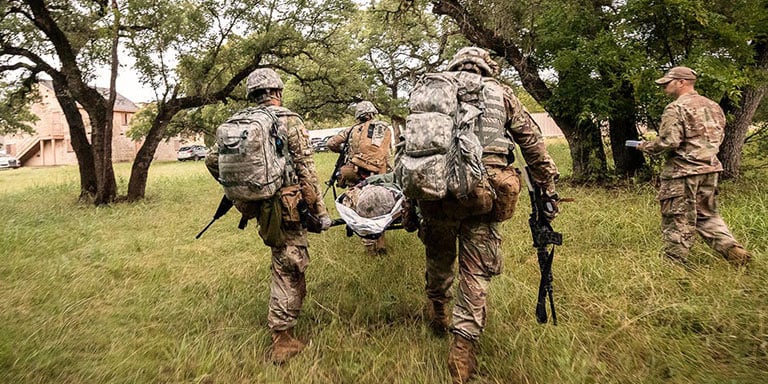 Get the injured person into a comparatively safe area as soon as possible. If there is no cover immediately available, try to get the injured person to a location where they are not visible to the enemy. If that is not possible, try to reduce visibility from the enemy as much as you can. Feeling at least marginally more protected can help to keep those being treated for shock from getting worse. Evacuate the wounded person as quickly as possible.

Turn the Injured over to Medical Personnel

Your unit's combat medics have significantly more training at saving a life than you do. They also have better, more sophisticated equipment with which to do so. When they are present, let them deal with the most severe cases. Using these soldiers' abilities efficiently will reduce wasted time and resources and will improve the survival rate of the wounded. Transfer treatment of your badly injured buddy to one of them whenever possible.

Deciding who to treat and in what order can be difficult. Remembering the acronym "DIME" can help you decide how to use your time efficiently and effectively when administering buddy first aid.

Where to Get Buddy First Aid Training 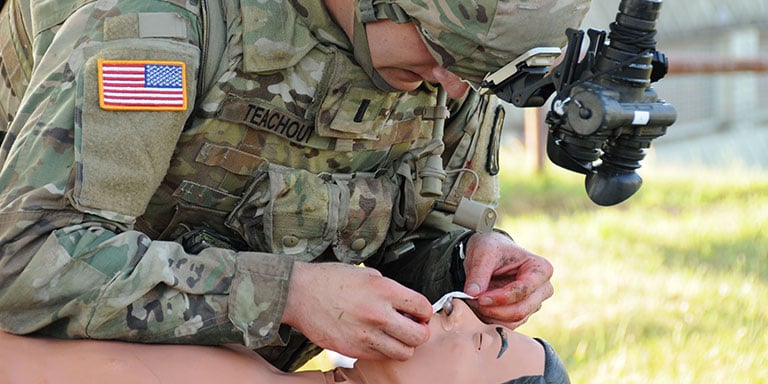 The military provides opportunities to learn how to treat a fellow combatant in need.

Basic Training includes several hours of minimal first aid training. Your unit may receive additional training over time. If you are being deployed, you will receive first aid training as a part of your processing for overseas movement (POM) training. Depending on your military occupational speciality (MOS), your unit's resources, and other factors, you may be offered more advanced first aid training.

The Combat Lifesaver Course is an Army program designed for soldiers who have more advanced training than a typical soldier but less than a Combat Medic. Combat units should have roughly one Combat Lifesaver (CLS) for every ten men.

Combat Medics obtain the 68W MOS after a 16-week course (or after a one-year course, in the case of 68WM6, who are also nurses). They must also obtain certification from the National Registry of Emergency Medical Technicians at the EMT level or higher.

Administering buddy first aid can be stressful and difficult, and it often requires making tough decisions at a moment's notice. It can also be crucial for saving the lives of your fellow soldiers. It is important to understand buddy first aid best practices and train repeatedly for these intense combat situations. The more prepared you are, the more successful you'll be. Your wounded friends will thank you for it.