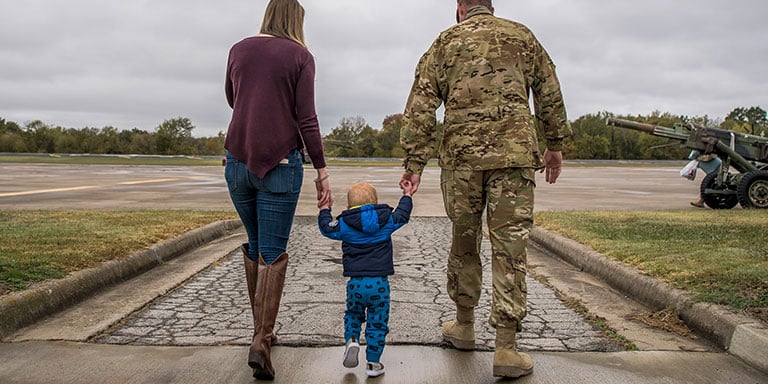 Preparing for a baby — whether planned or unplanned — is hard enough for civilians. When it comes to family planning, military personnel face additional challenges that are best dealt with proactively.

Most of these added challenges manifest, in some form, as a loss of control. In civilian life, you're free to prepare for a baby however you wish, but in the military, the process is a bit more regimented. In this guide, we'll review some important financial considerations and common benefit questions, as well as parenting complications related to time off, legal issues, and deployment. 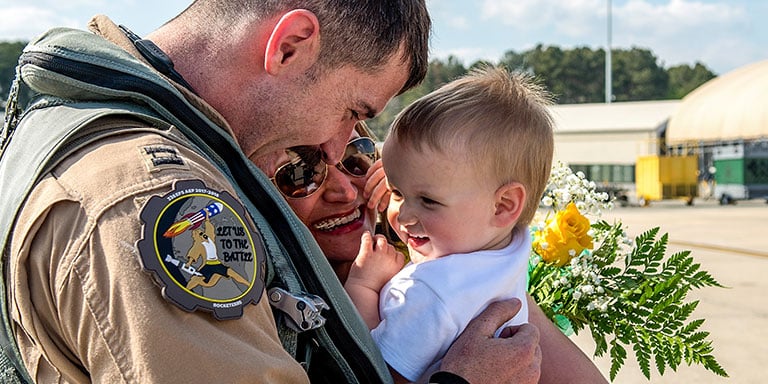 Most family-related military benefits hinge in some way on the Defense Eligibility Enrollment Reporting System (DEERS). When you get married, get divorced, have a child or experience any other significant change in your immediate family, you'll have to report the change to your benefits administrator, who will record it in DEERS.

For instance, when you're expecting a child, you'll need to designate one primary and one secondary caregiver in DEERS. Only the people so designated in the system will be eligible to receive benefits associated with those titles, and there are no exceptions to this policy. You'll also need to create a family care plan which will, among other things, identify the people who will assume legal responsibility for your child if something tragic happens to both parents. 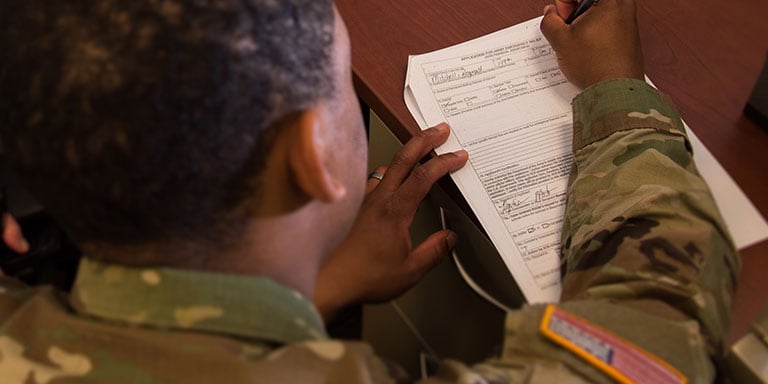 Many people are under the impression that you'll be entitled to extra pay if you have a child while you're in the military, but this is largely untrue. You may receive a small increase in your housing or sustenance allowances, or you may become eligible for a housing allowance that you didn't previously qualify for, but for the most part, the financial benefits of having a child will come in other, non-military forms. For instance, you'll be able to claim your child as a dependent on your taxes, which, for most parents, is the most significant source of savings.

The military will, of course, provide free access to pre and postnatal medical care at on-base and off-base VA medical facilities. Alternatively, you may elect to see a private doctor under your TRICARE health plan or other private insurance that you may have.

If you decide to see a private doctor who accepts TRICARE, ensure that their insurance people thoroughly understand it. TRICARE differs significantly from other health insurance plans. Civilian doctors who don't know that may bill incorrectly and unwittingly create medical or financial problems for their patients, sometimes to the tune of thousands of dollars.

When it comes to childcare, you again have a few different options. If you're stationed at a large base, it may have on-base daycare facilities that you can utilize free of charge. There are often long waiting lists, though, so be sure to reserve your spot as far in advance as possible. If you can't get on the waiting list, or if there is no free daycare on your base, you'll have to make other arrangements. 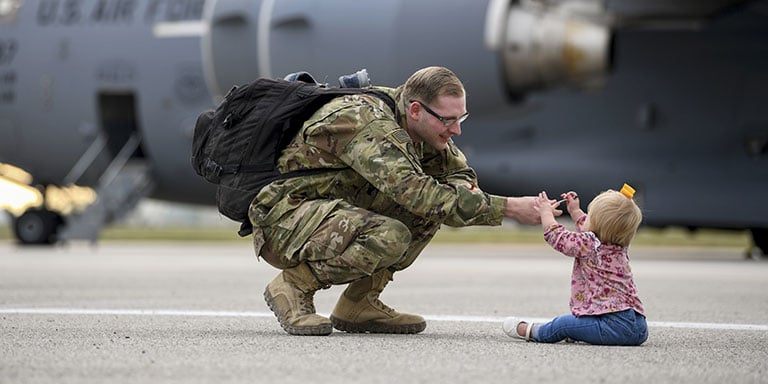 You may be afforded some extra time off before and after your baby arrives, but this depends on many factors. In no case, though, will you get the six to twelve months of leave that some new parents get in the civilian world.

All military service members who meet a few basic eligibility requirements are entitled to maternity, paternity and/or caregiver leave under the Military Parental Leave Program (MPLP). This program offers several types of non-chargeable leave (that is, leave not deducted from your normal leave balance). These are maternity convalescent leave, primary caregiver leave, and secondary caregiver leave.

Maternity convalescent leave is only available to women who give birth and is limited to six weeks. You may get more than six weeks if your doctor recommends more time and if your commander approves the request.

Adoptive parents and same-sex couples are entitled to most of the same parental leave benefits, with a few differences. Be sure to review the terms of the MPLP closely so you know exactly what you're eligible for. 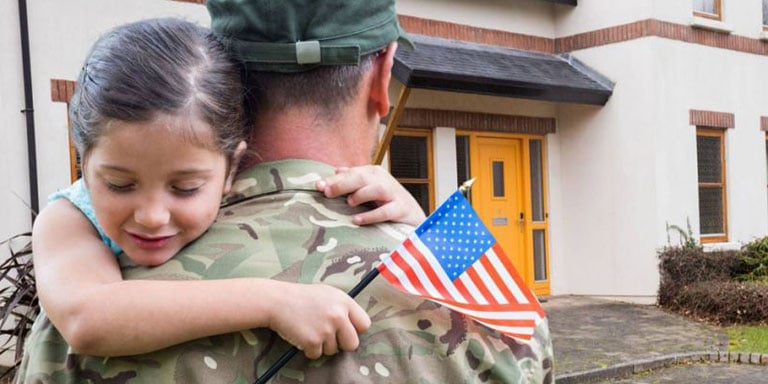 Exceptions to these policies are possible but never guaranteed. For instance, single people can choose to live off-base with command approval but usually must pay the rent themselves if they would otherwise be eligible to live in the barracks. If you're married, your living arrangements are usually pretty cut and dry, but if you're an unwed parent, it can get more complicated. In that case, the rules are generally as follows:

Note that these are general housing policies. Your particular family situation may be more complicated and thus subject to other, more nuanced policies. Check with your nearest DEERS office if you need help navigating your housing benefits. 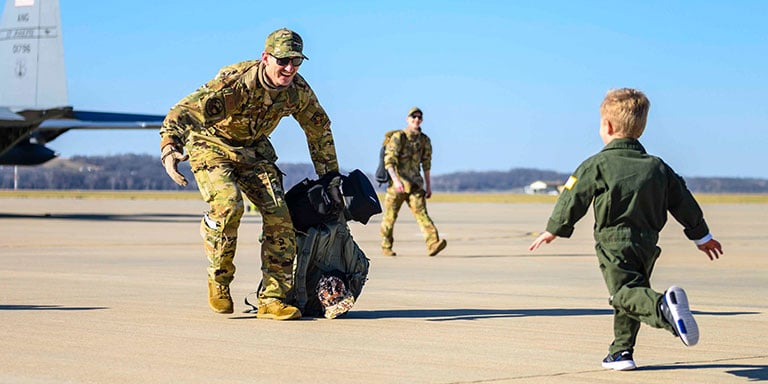 Unfortunately, the fact that you're a parent will have no bearing on whether, when, where or how long you're deployed. If you're ordered to deploy to an area that is not an active war zone, you may or may not be able to take your family with you, depending on the local availability of housing, the details of your assignment, and many other factors. Your family can't accompany you to a combat zone (not that you would want them to).

On the bright side, if you and your child's other parent are both in the military, only one of you can be deployed at a time. Should one parent be deployed, the other will be granted non-deployable status until the first parent returns. If you find yourself in this situation, and you're the non-deploying parent, let your command know right away that your partner will be deploying. If you don't notify the right people and end up with deployment orders of your own, getting them rescinded will be a long, difficult process.

Other Military Benefits and Resources for Families 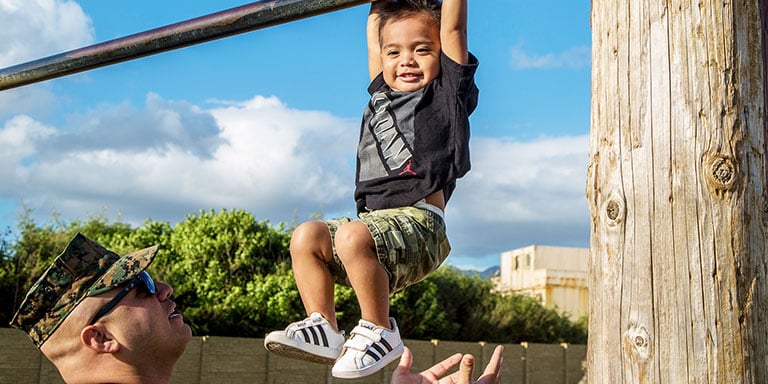 There are many military programs and benefits that families can take advantage of, three of which you should definitely know about: TRICARE; Morale, Welfare, and Recreation (MWR) programs; and military powers of attorney.

TRICARE comes in two tiers, Select and Prime, each of which has several variants and sub-plans. All active-duty military personnel are eligible to enroll themselves and their dependents in TRICARE Select for free. TRICARE Prime costs more, and you'll have to pay a portion of the premium yourself, but it offers access to a greater range and quality of healthcare services. All TRICARE enrollments and changes happen through DEERS, and if you don't enroll, you won't be able to use TRICARE benefits.

MWR is a broad program that provides sports and recreation centers, movies, hotels and many other family-oriented facilities and activities. Some of these activities and facilities are available for free, whereas others charge reasonable prices. Many military parents rely on MWR programs to keep their kids safe and entertained while they're on duty.

Finally, consider acquiring a military power of attorney from your on-base legal office. It can be beneficial for both parents to have a military power of attorney that names them attorneys-in-fact for their partner, especially if one or both partners are deployed. Military powers of attorney differ from their civilian counterparts in a few important ways. Most notably, they're broader and more streamlined — they grant the named parent carte blanche (or close to it) to quickly and easily sign legal documents in their partner's name. Civilian powers of attorney, by contrast, are generally more limited in scope and require more extensive supporting documentation.

Here are a few of the most common questions that people have about raising kids in the military.

Where can you send your child to school?

As far as the day-to-day logistics of sending your child to school, your options are more or less the same ones that civilian parents have. If you have the money and the inclination, you're free to enroll your child in a private school. Before you do so, have a talk with someone at the school and be sure to mention that you're in the military. Ask what you'll need to know about tuition, transcripts, and transfers should you get moved or deployed during the school year.

If you choose to send your child to a public school, research the Interstate Compact on Educational Opportunity For Military Children. In a nutshell, it's an agreement between all public education departments to help military parents streamline enrollment and placement for their kids.

What if the military parent is discharged or dies?

If the military parent dies, there will be many more variables to sort out. The benefits that the surviving parent retains will depend on the cause of death, marital status and many other factors. Be sure to create and regularly update a family care plan at your local DEERS office so that you'll have some idea of what to expect in the event of a parent's death.

That said, there are a few benefits that most surviving spouses and children of active-duty military personnel will qualify for. They are:

Most military kids are entitled to TRICARE coverage. Children may also receive DIC payments and death gratuity payments if they're the service member's closest living relative at the time of death.

Post-9/11 G.I. Bill benefits are also transferable to children if the service member doesn't use them. To qualify, the parent must have at least ten years of service, up to four of which can be future service obligations. Some states also offer additional education benefits for children of veterans. See this page for a list of some of the most common military benefits that parents and children can take advantage of.

Military family planning is a dense topic with many nuances, exceptions and contingencies. Hopefully, this article has given you a basic but solid understanding of what you can expect if you have a child while one or both parents are in the military.