Second Amendment sanctuary is a fast-growing, hotly debated subject between pro-Second Amendment advocates, anti-gun groups, politicians and local, state & federal legislators. It's a complex topic with a myriad of opinions, laws and constitutional arguments surrounding it, and there are many layers of rules and regulations clashing on all levels of government. Most importantly, though, it's a topic that can't be ignored; 60% of all US counties have some form of Second Amendment sanctuary in place, as do 17 states.

What is Second Amendment Sanctuary? 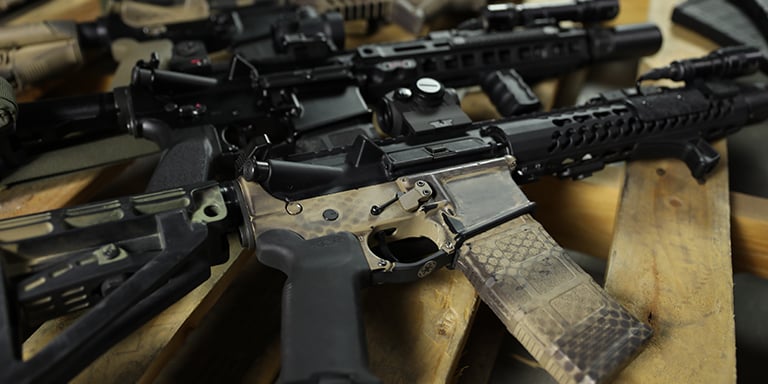 For example, Nebraska Governor Pete Ricketts signed a proclamation which designated Nebraska a Second Amendment state, but no specific laws have been created and enforced; the proclamation is essentially an acknowledgement encouraging legislators and law enforcement agencies not to enforce federal firearm regulations.

On the other hand, Columbia County in Portland, Oregon passed an ordinance which not only stated that county officials would not enforce most federal, state and local firearm laws, but that the county would also issue fines to anyone who did attempt to enforce restrictive gun regulations. So from symbolic declarations to hefty fines and anywhere in between, Second Amendment sanctuary exists in many forms.

Where did the Term "Second Amendment Sanctuary" Originate? 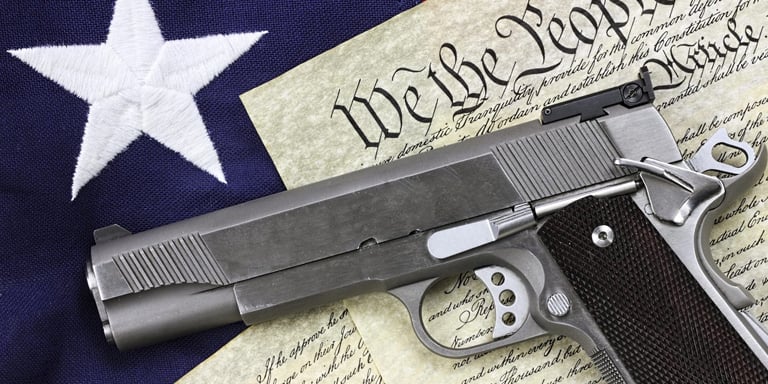 The term itself has its origins in (and is a direct response to) another sanctuary movement: sanctuary cities, or the idea of ignoring the enforcement of federal immigration laws. The sanctuary city movement in the United States can be traced all the way back to the 1980s, but with immigration reform having become a more mainstream political issue in recent years, the number of local and state governments with sanctuary city policies has grown. New Mexico, Colorado, California and Oregon, in particular, have enacted sweeping policies not to enforce immigration laws.

It's no secret that, generally speaking, liberal politicians in America tend to favor sanctuary cities, while conservatives lean toward the enforcement of immigration laws. The term "Second Amendment sanctuary" was crafted as a calculated, political response to the idea of sanctuary cities, instead applying the word "sanctuary" to the constitutional right to bear arms. 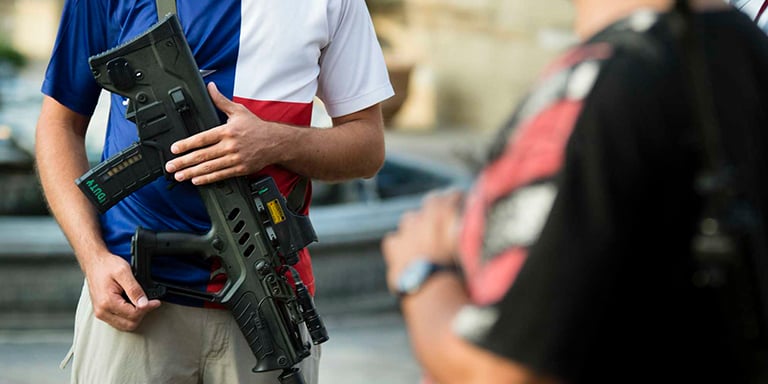 The short answer to this question is "it depends," with the biggest factor being how the legislation itself is worded. If a state or county's Second Amendment sanctuary legislation says (or even implies) that federal firearm laws do not apply to them, then the answer is no; federal law still applies everywhere.

Under the Tenth Amendment, however, states can legally decide not to enforce federal laws, and that's a big part of what makes Second Amendment sanctuaries work.

The state of Kansas, for example, passed the Second Amendment Protection Act in 2013. With this law, Kansas barred state and local officials from enforcing federal firearm laws, as is their right under the Tenth Amendment. The legislation, however, did not stop federal authorities and prosecutors from exercising their authority in arresting and charging two men in the state of Kansas in 2019 for the sale of a suppressor.

This case is the perfect example of enforcement vs. applicability, and helps to shed light on the legality of Second Amendment sanctuary. The state of Kansas legally did not have to enforce the federal government's laws against buying and selling suppressors. At the same time, though, the two citizens involved in the sale of the suppressor were still subject to the federal suppressor law and its penalties.

The same principle applies for businesses. It would be most unwise for a gun store to stop running universal background checks just because of assertions made at the state or county level.

In February of 2010, Utah became the first state to enact what is considered to be a form of Second Amendment sanctuary law. The Utah State-made Firearms Protection Act maintains that the federal government has no authority to regulate firearms that are made and sold within the boundaries of the state. In over a decade since that groundbreaking legislation, sixteen other states have created laws that outline one form of Second Amendment sanctuary protection or another. Those states include: Alaska, Arizona, Arkansas, Idaho, Kansas, Missouri, Montana, Nebraska, North Dakota, Oklahoma, South Carolina, South Dakota, Tennessee, Texas, West Virginia and Wyoming.

States with a Majority of Second Amendment Sanctuary Counties

Not all states have Second Amendment sanctuary laws in place at the state level. Of those that don't, however, twelve states do have a majority of their counties designated as Second Amendment sanctuaries. These states include: Colorado, Florida, Illinois, Kentucky, Maryland, Michigan, Nevada, New Mexico, North Carolina, Oregon, Virginia and Washington.

Of these twelve states, Washington stands out from the rest in that its Second Amendment sanctuary counties are pushing back against both state gun laws and federal gun laws. Twenty-three county sheriffs in Washington have vowed not to enforce Washington's 2018 ballot measure I-1639, which increased the minimum age to purchase a semi-automatic rifle from 18 to 21 and implemented mandatory background checks for citizens purchasing semi-automatics.

States with a Minority of Second Amendment Sanctuary Counties

Still more states have counties that have enacted Second Amendment sanctuary policies, despite having no statewide gun sanctuary resolutions. Counties in these states, however, are in the minority, as most of the surrounding counties have not declared sanctuary status. The thirteen states with a minority of Second Amendment sanctuary counties include: Alabama, California, Georgia, Indiana, Louisiana, Maine, Minnesota, Mississippi, New Jersey, New York, Ohio, Pennsylvania and Wisconsin.

States with No Second Amendment Sanctuary

There are eight states which have no Second Amendment sanctuary declarations, neither at the state nor local level. These states include: Connecticut, Delaware, Hawaii, Iowa, Massachusetts, New Hampshire, Rhode Island and Vermont. Most of these states have historically prohibitive stances on Second Amendment rights.

Which Anti-Second Amendment Policies are Being Resisted? 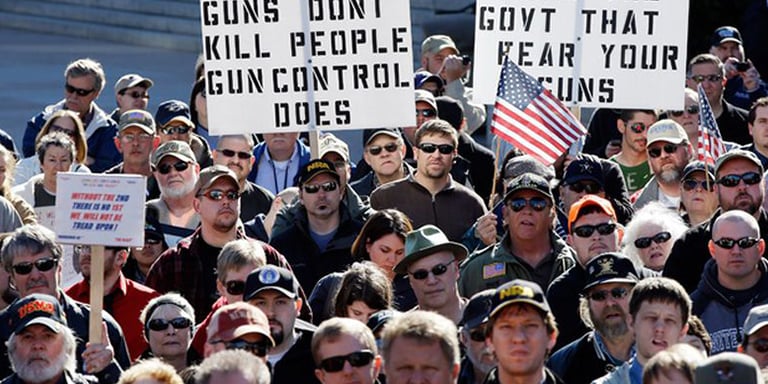 On the whole, when a state or local government passes Second Amendment sanctuary laws, the legislation rejects federal firearm laws entirely and, instead, defers to state firearm legislation, which is much less restrictive. The federal laws these smaller governments aim to curtail normally include assault weapon bans, high capacity magazine bans and universal background checks, among others.

In some cases, the legislation gets much more specific, outlining precise grievances with federal firearm laws while attempting to exempt citizens from those laws. Here are a few examples of Second Amendment sanctuary policies at work at the state level.

Texas passed its Second Amendment Sanctuary State Act in June of 2021. In addition to rejecting federal firearm laws, the act also grants legal exemptions for suppressors that are manufactured in the state and remain in the state. The act also prohibits state and local governments from enforcing federal laws against suppressors. 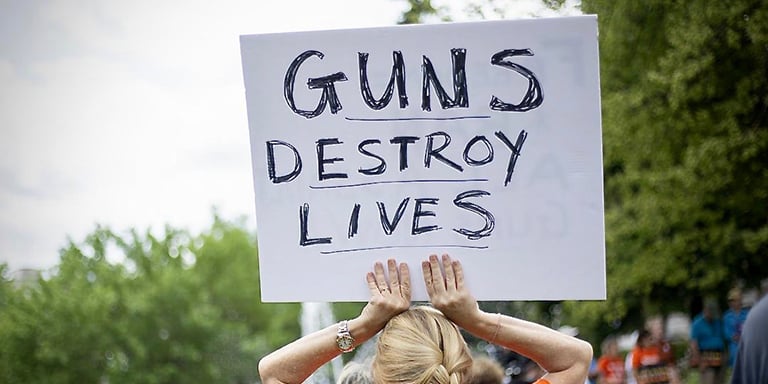 While Second Amendment advocates see sanctuary laws and policies as a means by which to shed potentially unconstitutional federal enforcement, anti-firearm activists (both within and outside the government) aren't happy about the pushback. There have been attempts at the local, state and federal levels to circumvent sanctuary policies; some have even been successful.

Unlike state politics (and much unlike national politics), citizens tend to have more direct access to their local representatives to voice their concerns. This is what happened in Taos County, New Mexico, when local anti-gun advocates spoke at a town hall, convincing County Commissioner Gabriel Romero to reverse course on Taos County's Second Amendment Sanctuary resolution. The county chose instead to fall in line with New Mexico's restrictive gun control measures.

Pressure by anti-gun groups across the United States could continue to cause officials at the county level to change their mind on Second Amendment sanctuary. This same pressure could also take a county or municipality off the fast track to becoming a sanctuary.

While quite a few states have their own statewide sanctuary policies in place, not all states do; in fact, well over half of the states in the union have no statewide sanctuary regulations. Some states are more keen than others to enforce anti-gun statutes and even have laws in place to attempt to back up that enforcement.

Virginia, for example, has laws specifically preventing local governments from attempting to supersede state laws. Virginia also has statewide policies that prohibit counties and municipalities from regulating firearms at all. States whose sanctuary counties represent a minority of the states' citizens are especially vulnerable to being forced into compliance.

Second Amendment sanctuary is a relatively new phenomenon, so the federal government hasn't quite had the chance to respond in an official capacity to this level of widespread defiance by so many states and counties. That may change soon, though. Recently, Missouri Governor Mike Parson signed the Second Amendment Preservation Act, essentially declaring federal gun laws invalid in Missouri. Brian Boynton, the Assistant Attorney General at the Department of Justice, wrote a letter to the governor, expressing his displeasure toward the new law and asking for clarifications.

In his letter, Boynton said, "Missouri lacks the authority to nullify federal law, to shield Missouri businesses or its citizens from the reach of federal law, or to obstruct and prevent federal employees and officials from carrying out their responsibilities under federal law." He also stated that federal agents and agencies "will continue to execute their duties to enforce all federal firearms laws and regulations." He was less specific about potential consequences, however, simply stating that Governor Parsons should "provide the clarifications" requested in the letter.

It's unclear what the consequences for noncompliance may be, and whether or not they'll be levied against other states or counties outside of Missouri. There is a historical precedent for the federal government to deny highway funding to states or counties that refuse to enforce its laws. There's also the possibility for any future court proceedings on the issue to end up at the Supreme Court, who could make the final decision. This is merely the very beginning of what could be a very long, arduous argument between local and state governments and the federal government.

Like any other contentious political issue, Second Amendment sanctuary is very complex. Some consider its legal status to be non-existent, while others believe it is imperative for maintaining rights guaranteed to citizens under the Second Amendment. Whatever side of the argument you fall on, new laws are sure to come, new challenges to those laws are sure to be initiated, and this debate will rage on as an important facet of firearms discourse in the United States. 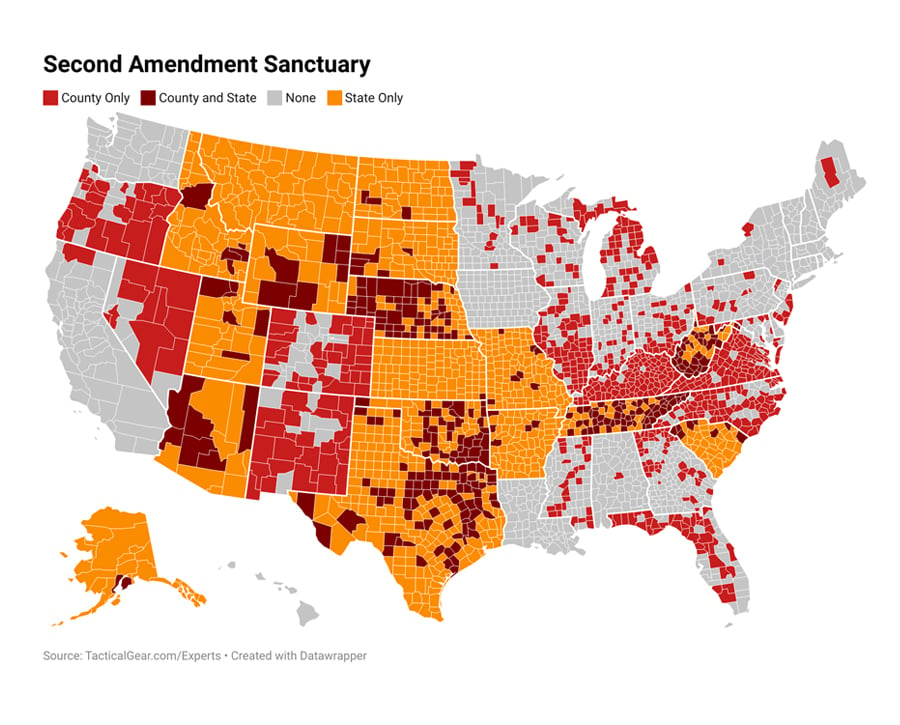