Basics of Crowd Control during Riots and Civil Unrest 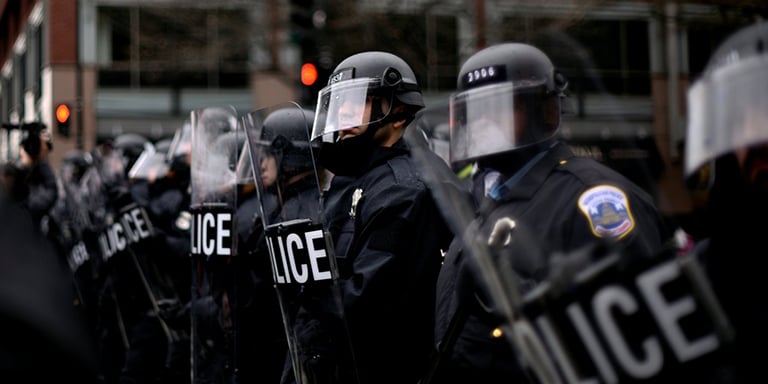 A well-run police agency will plan long in advance of any act of civil unrest. The time for discussion and planning is not when hundreds of protesters have already assembled.

Detailed plans should already be in place and able to be implemented at a moment's notice. The plans should include all departments within the city government working together in a coordinated response. 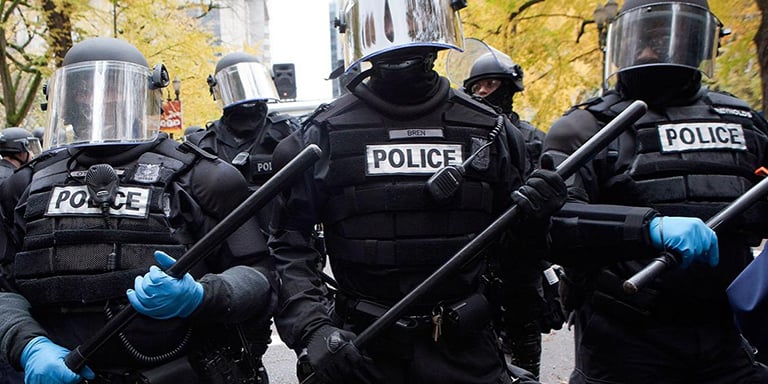 Every member of the police agency should have received regular training on basic crowd control tactics. Training should include various formations, tactics, and special arrest and recovery teams.

Each member of the department should be in possession of special riot control equipment which, at a minimum, includes a helmet with a face shield. Rocks and glass bottles are common weapons thrown at police lines. Officers without proper head and face protection should only be placed on the police line as a last resort.

Another essential piece of equipment is the riot baton. This is usually a long, wooden baton used to hold the police line or push back against advancing rioters. Riot shields are also very effective if properly used to maintain a police line and protect against flying objects. 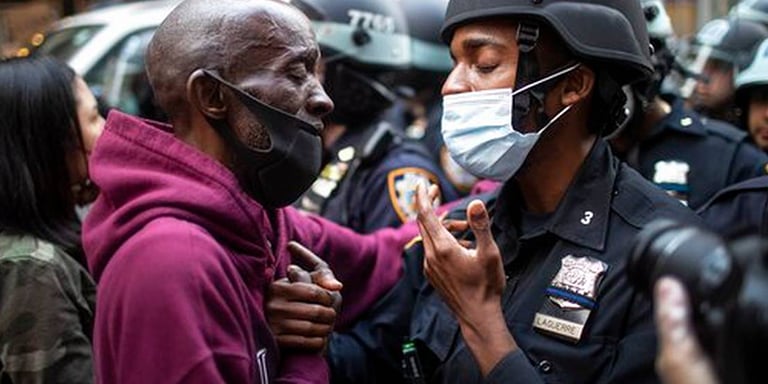 Communication is essential in times of civil unrest. This includes communication between civilian and police leaders as well as clear communication from the top of the department down to the officers holding the line.

The police department should have a designated public information officer. Information should be continually flowing to the media. Every attempt should be made to answer questions and, when necessary, correct the record. Rumors become facts when they are on the evening news and can unnecessarily inflame protesters. 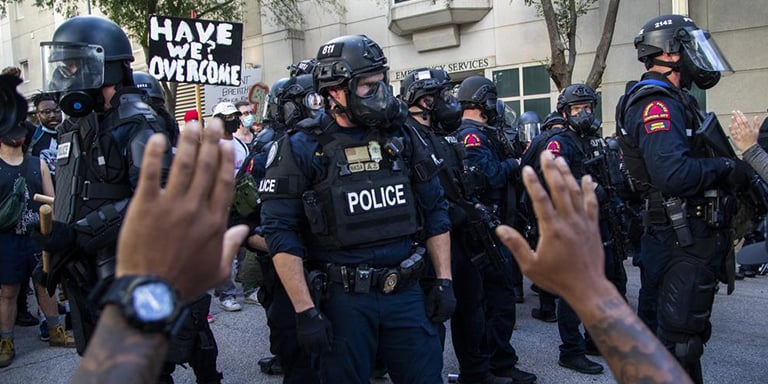 It is important for officers to understand that whenever a large group of individuals joins together, the group takes on an identity of its own. In peaceful protests, this identity can form a powerful feeling of solidarity amongst its participants. However, in violent civil unrest, the situation can be extremely volatile. Members of the crowd will do things while in the group that they would not do alone. Being a member of a large crowd gives people the belief that they can act out anonymously and without consequence.

The motives and actions of persons participating in an event will differ greatly. Many will be peaceful protesters who only want to exercise their First Amendment right to protest. Mixed in will be people who will try to incite the crowd to riot. These are usually the rock and bottle throwers. Members of this second group are looking to cause as much damage and destruction as possible, burning cars and smashing windows. Members of the last group are the opportunists. Seeing the police unable to respond, these people enter businesses and steal as much as they can carry. 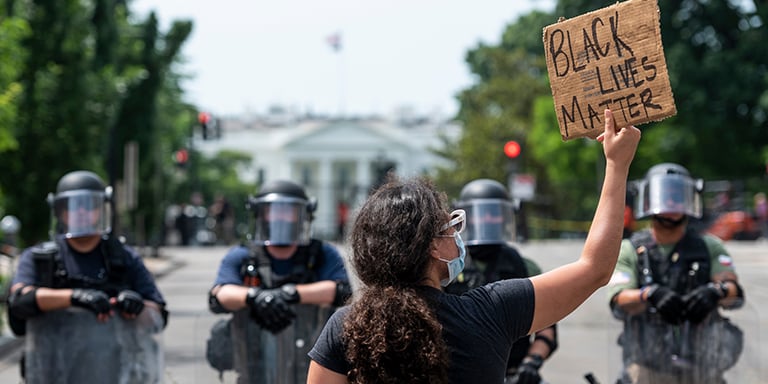 There will be a line drawn by the police where protesters must stop. This may be near city hall, a police station or other city buildings. Once the line is established, it will be a human wall of police officers shoulder to shoulder with reinforcements and arrest teams just behind them. Also behind the line will be a commanding officer who will make all decisions regarding manpower and arrests. 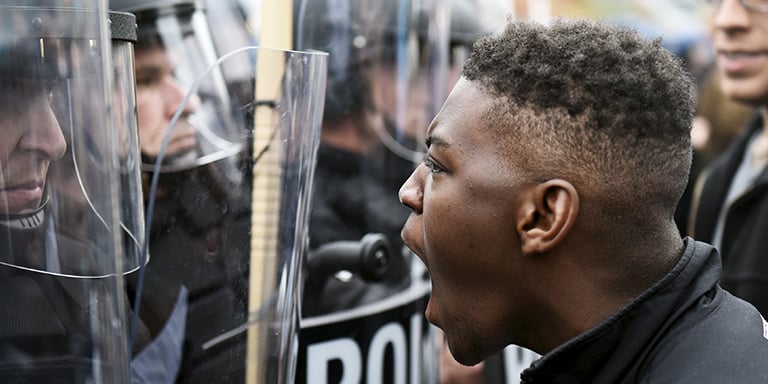 Officers on the front line of a protest cannot take offense to what is said. The protesters are angry and want to be heard. They will sometimes try to engage officers with abusive statements, hoping that the officer will lose their cool and act out. The police officer must look past and ignore what is being said and understand that it is meant to provoke them. Officers should not look at the situation with a “police vs. protester mentality.” The protesters are not the enemy. Officers must maintain an unbiased attitude toward the protesters. 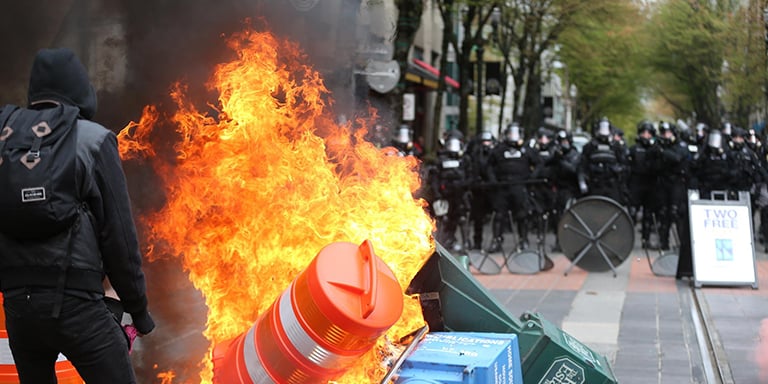 This is a similar formation to the static line but is used to move protesters from one place to another or to disperse them. This tactic is generally used when commercial properties are being damaged, stores are being looted or fires are being set. The commander in charge of the unit will move with the unit, giving commands to move forward, halt or move forward double time.

Making Arrests within the Crowd

It may be necessary to place some persons under arrest. Not everyone who could be arrested will be in a crowd situation. Persons who are committing serious acts of violence must be stopped by arrest. If a cooperative relationship exists with the communities protesting, this can often be achieved swiftly and with minimal collateral discord. A superior officer who is on the scene should make the decision to arrest.

Behind the officers on the police line will be other groups of officers who are part of arrest teams. Their job will be to quickly enter the group, arrest the violent offender and then quickly bring them behind the police line and transport them from the scene. Police lines will usually have several teams waiting for the command to enter the crowd and make a specific arrest.

Two groups of officers will go unseen. The first are acting as intelligence officers who are observing from within the crowd while working undercover. Narcotics officers are naturals for this assignment. The second group are members of the department's tactical or SWAT unit. They, along with officers from neighboring jurisdictions, will be held in reserve out of sight as a last resort to quell widespread violence should it occur.

It is always advantageous to control the high ground. This will usually be at preset observation posts on rooftops. From these elevated positions, the dynamics of the crowd can be observed and additional manpower can be shifted to match the movements of the group.

Elevated positions are also excellent locations to set up police cameras to record and document the illegal actions of individuals. The camera recordings may later be used as evidence against members of the crowd. Equally important, the camera recordings may also be used to document the events as they occur and can be shared with news organizations or the general public over social media.

A police officer's job is never easy, but this duty is one of the most stressful a police officer is ever likely to face. Citizens have been protesting for as long as we have had a constitution. The potential for violent escalation can make these demonstrations dangerous events for police officers who place themselves in harm's way.