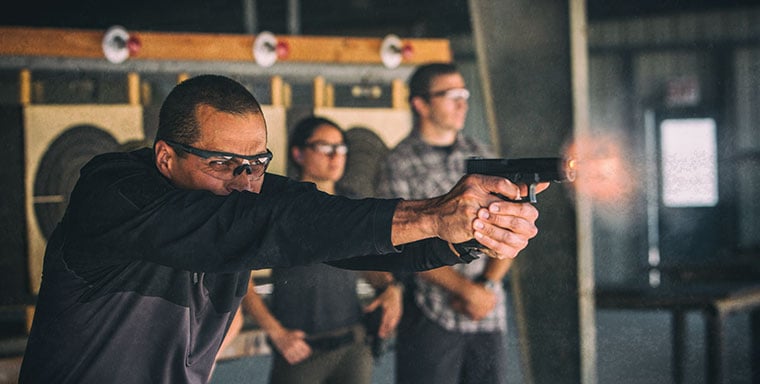 Many believe firing a handgun is as easy as load, charge, point and squeeze the trigger. While this does technically qualify as shooting, the difficult part is hitting the target. A new shooter must identify and correct common errors before they will find success and accuracy in handling their new firearm. 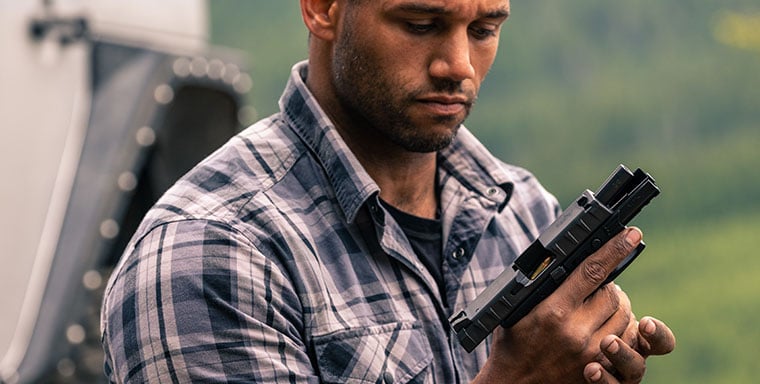 The next loading error is elementary but also very common. A new shooter will properly load the gun with a magazine, only to forget to charge the weapon by pulling the slide to the rear and releasing it. Additionally, many new shooters fail to release the slide fully, giving their hand a free ride forward. This movement slows the slide and interferes with the weapon's loading action. Remember to charge the weapon by pulling back the slide and releasing it. Proper loading and charging requires extensive knowledge of your handgun's parts and functions. 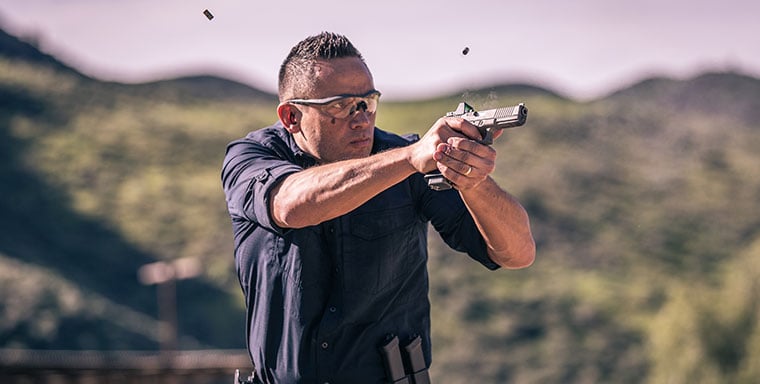 By far, the most common error new shooters must overcome is that of anticipating when the gun will fire. When a shooter anticipates a shot, they usually dip the muzzle down and miss under the target. In extreme cases, the shooter may shoot the ground. The best drill for overcoming anticipation is the coin drill.

With an empty weapon pointed in a safe direction, balance a coin on the weapon's front sight. Practice squeezing the trigger while keeping the coin balanced. This practice aid is an excellent dry-fire drill. It will not only help the shooter overcome anticipating the shot but also allow them to practice the art of a smooth trigger pull.

Some new shooters will be fearful of the weapon. The recoil of the firearm in the shooter's hand coupled with the loud bang will cause a bit of gun shyness. Practice will help most shooters overcome that uneasy feeling and take control. Different shooters will react differently, and if this uneasiness continues, a session of expert instruction will put almost everyone at ease with their firearm.

Frustration is a prevalent emotion when a shooter cannot consistently hit the target. Firing a handgun can be compared to swinging a golf club. There is a proper grip, stance, backswing, forward swing and follow-through. Get any one of these wrong in golf, and you'll be walking in the woods looking for your ball. The same is true with shooting a handgun. Grip, stance, sight picture, sight alignment and trigger squeeze must all be correct or you'll consistently miss the target. The good news is that unlike golf, where your entire body is in motion, in shooting, your body is still except for one finger.

It can be tough to self analyze and correct shooting deficiencies. It may only take a qualified instructor two minutes of observation to accurately identify and correct a shooter's problems. A newer shooter who is having difficulty should always ask for help:

"Watch me shoot a few rounds and see if you can tell me what I'm doing wrong."

These are words any excellent range instructors love to hear. Watching a shooter miss the target consistently is painful for any instructor and some will offer advice even before a shooter asks. 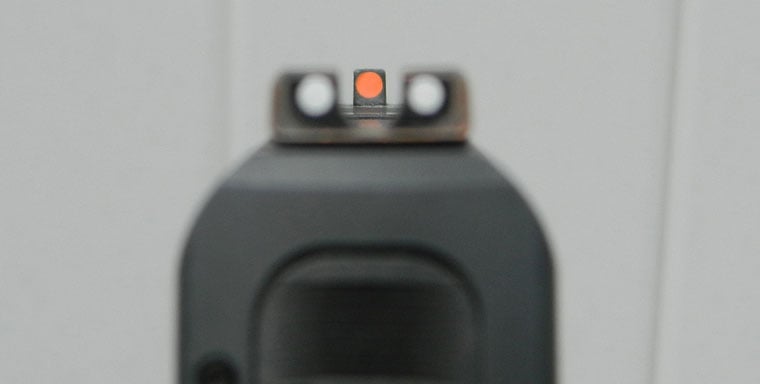 A new shooter must learn what proper sight alignment looks like. Many handguns use three dot sights. Two of the dots are on the rear sight, and one dot is on the front sight. The trick is to align all three dots on a horizontal plane. Once that's achieved, allow equal light or spacing between the center dot and the two side dots. 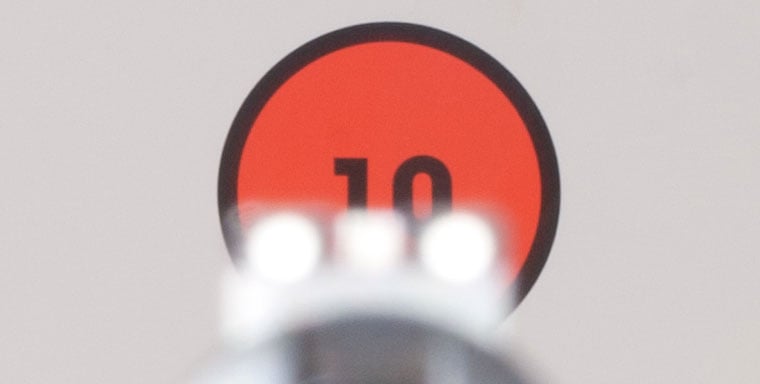 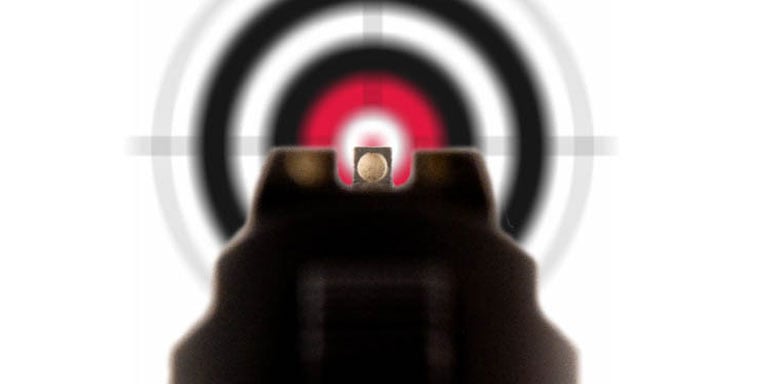 Another common problem is focusing on the wrong thing. New shooters must train themselves to focus their dominant eye on the front sight only. The rear sight and the target should be visible but somewhat out of focus. A common problem is when a shooter attempts to aim using the non-dominant eye. 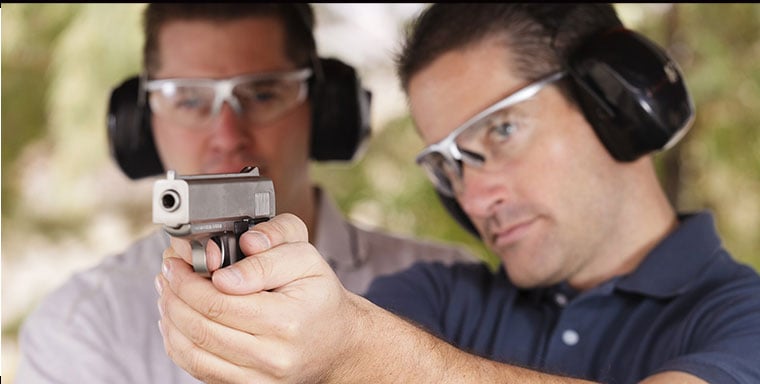 There are two schools of thought regarding properly taking aim: using only the dominant eye or keeping both eyes open. Newer shooters should at least be aware of which of their eyes is dominant.

To determine this, stare at a small object on the wall with both eyes open. Hold one finger out so it is pointing directly at the object. Then close one eye at a time. When the dominant eye is closed, the finger will appear to jump to the left or right. When the other eye is closed, the finger will still be pointing at the object. Most newer shooters should start with single eye shooting aiming with their dominant eye.

5. When All Else Fails 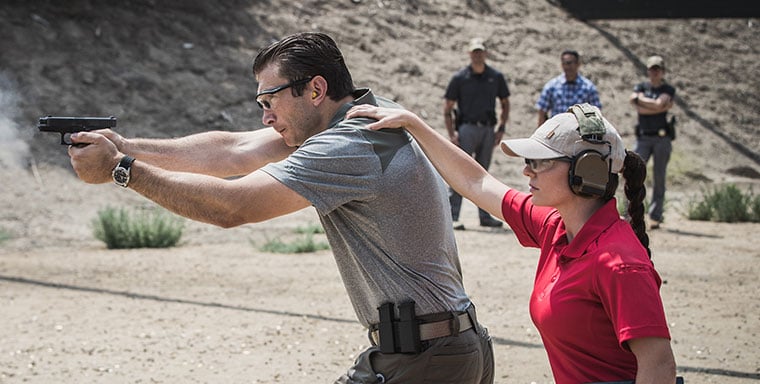 The final two sighting errors are less common, but certainly worth mentioning. First, how is the shooter's eyesight? After excluding all other causes, an instructor may suggest the shooter have an eye examination. Many poor shooters have learned on the range that it was time to get glasses. Lastly, whenever a shooter scores poorly, the first thing they blame is the gun's sight alignment. It only takes a minute for an instructor to shoot a tight five-shot group, demonstrating that the sights are not the problem. There are, however, rare occasions when the group is way off center and the sights do need adjustment. 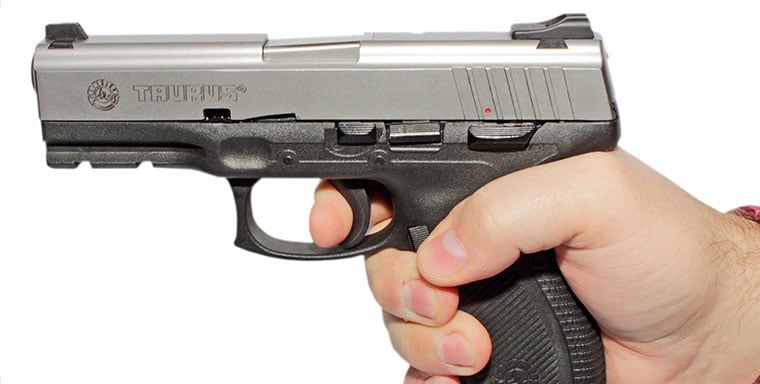 If a shooter is confident in their sight picture and alignment, then their trigger squeeze may be the problem. The shooter's entire body will remain completely still with only their index finger moving less than an inch to depress the trigger. If a new shooter's target shows a pattern or grouping on one specific part of the target, then a flawed trigger squeeze may be the culprit.

A low grouping is usually due to anticipating the shot during the trigger squeeze. The shooter ends up jerking the trigger, which causes the barrel to dip, and the rounds hit low (if they hit the target at all).

A target pattern that is aligned left to right but well above the center of the target may be caused by heeling the gun. This means the shooter has placed excessive pressure on the heel or lower part of the weapon anticipating the gun's recoil. It will be difficult for a shooter to self identify and correct these problems. A qualified range instructor, however, can almost immediately diagnose them. 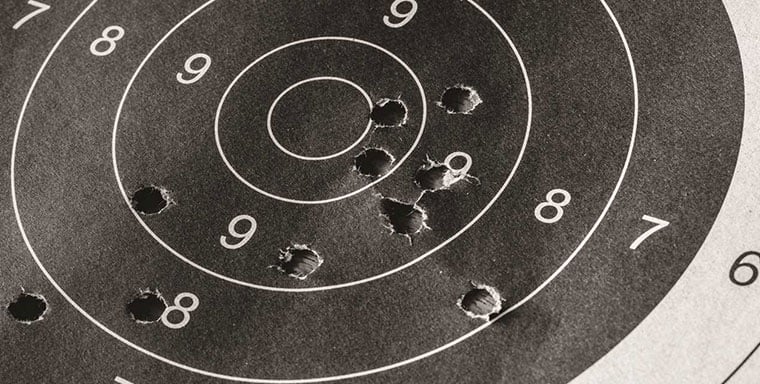 Does the target look like it was shot with buckshot, with bullet holes all over the target? New shooters often experience this problem, and it can be frustrating. It's common for an inexperienced shooter to forget about breath control. The shooter's body must remain still except for the trigger finger. When a shooter is either inhaling or exhaling, the body is moving, and sight alignment will also be constantly on the move. 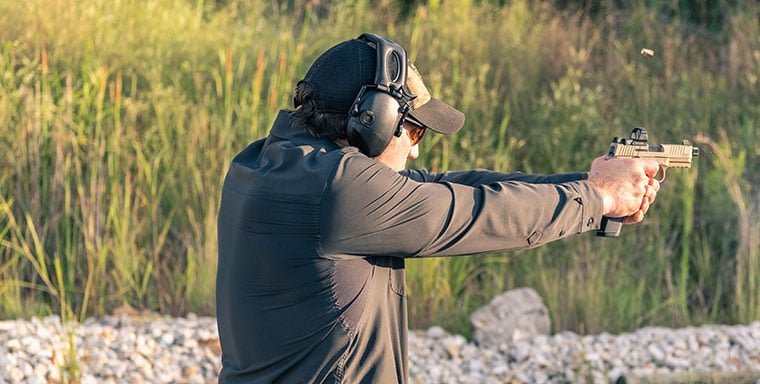 The easiest way for a handgun shooter to control their breath is to put the sights on the target, and inhale normally. Then exhale about half the air, stop breathing, and take the shot. This pause will give the shooter four to seven seconds to fire the round. If the shot is not taken in the allotted time period, repeat the process with another breath.

The second method common to firing a rifle is using the momentary pause between a full exhalation and the next breath. If time is not a factor, then a shooter can use this method. However, often during a handgun course of fire, the shooter may be instructed to fire several rounds in a short time-span. The half exhale method is superior when time is a factor.

A newer shooter is tasked with mastering several skills. It will take time, practice and some qualified instruction. However, nothing is more rewarding than seeing a tight group of rounds in the center of the target. Overcome these obstacles, and what seems complicated will become almost automatic. The new shooter will gain confidence in their ability and will enjoy years of success on the range.