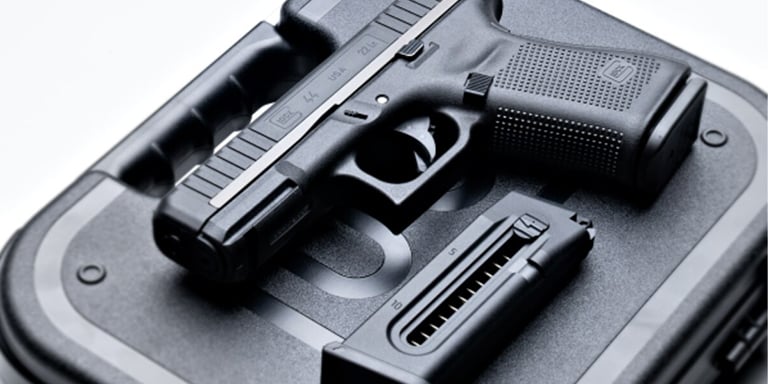 How do guns work? Every part that goes into the building of a weapon has a specific purpose. Firearm owners should be able to identify the major parts of their weapons. They should also understand how these parts function together to allow the weapon fire.

Firearms fall into three distinct categories: rifles, shotguns and handguns. Each type serves a different purpose. Handguns are the weapon of choice when size matters, and are the smallest and most portable category of firearm. They are easy to conceal and are the perfect choice when the size and weight of a long gun would not be practical. 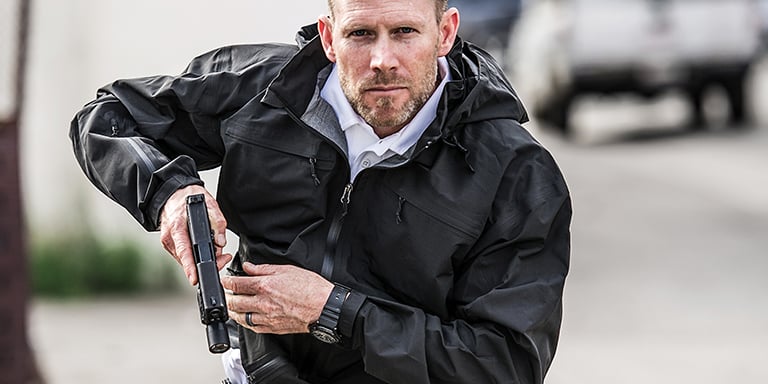 All police officers carry handguns on their duty belt as their primary weapon because of the small size and portability. Many civilians possess concealed carry permits allowing them to carry a firearm as long as it's hidden from public view. It's the perfect choice to be concealed in an ankle holster, under a loose fitting shirt or even in a handbag. Handguns are also the number one choice for home protection. They are small, easy to secure and are an excellent weapon for close-quarters encounters.

Handguns may be the most difficult category of weapon to master and therefore competitive target shooting is growing in popularity. Handguns don't have the long range capabilities of a rifle or the devastating force of a shotgun, but given their size limitations, they are the perfect weapon for home defense or target shooting or everyday carry.

The parts on any firearm can be classified as either a weapon's moving parts or its stationary parts. 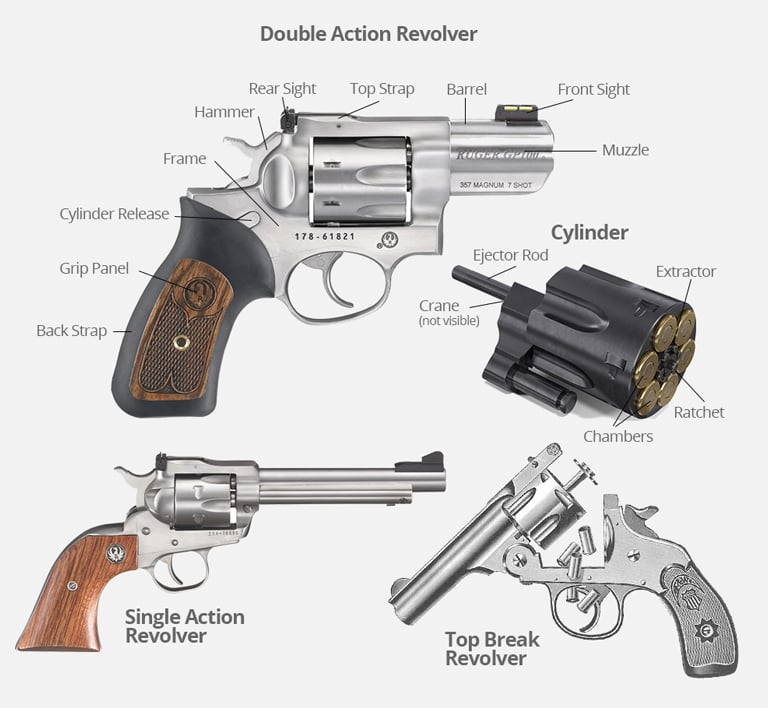 The Grip:
This is the area where the shooter holds the weapon. It is usually the only wooden part of the gun. It will often have a fine checkered pattern to aid in the shooter's grip and may have an implanted manufacturer's medallion. Grips can be customized to different sizes to accommodate the shooter's hand. Some combat grips are constructed of a non-slip hard rubber material.

The Front and Rear Sights:
These are located on top of the barrel and allow the shooter to align the weapon with the intended target.

The Barrel:
The barrel is secured along the top of the weapon and is built into and affixed to the frame. The inside of the barrel has a spiral pattern of cuts called lands and groves. These cause the bullet to spin as it travels through the barrel. This spinning action continues during the bullet's flight, greatly improving its accuracy.

The Muzzle:
The muzzle of any firearm is the end of the barrel where the bullet will exit. The term muzzle-awareness refers to always knowing in what direction your weapon is pointed.

The Trigger Guard:
This is the piece of metal that encircles the trigger preventing accidental trigger engagement.

The Frame:
The frame can be described as the "bones" of the weapon. It is generally a single piece of metal that is precisely machined to accept all the other parts of the weapon.

The Trigger:
This is located inside the trigger guard toward the bottom of the weapon. When the trigger is pulled to the rear, either one or two things will happen depending on the type of revolver. If it's a double-action model, as the trigger is pulled, the hammer will move to the rear and the cylinder will rotate, aligning the next chamber with the barrel. As the shooter continues to squeeze the trigger, the hammer will be released, traveling quickly forward, striking a firing pin and causing the weapon to fire. Some models have the firing pin incorporated into the design of the hammer.

If the revolver is a single action, the shooter will have to manually cock the firearm by pulling the hammer back and locking it in place. When the trigger is squeezed, the hammer will be released, traveling quickly forward causing the weapon to fire.

The Cylinder:
The cylinder is one piece of steel usually with either five or six chambers. Each chamber holds one round of ammunition. The cylinder gets its name from its cylindrical shape. As the hammer is drawn back, the cylinder rotates aligning the next chamber and round with the barrel.

The cylinders are loaded differently depending on the type of revolver. Most modern revolvers have a release that allows the cylinder to swing out to the side and down. This makes removing spent cartridges and reloading easy. Many shooters use speed loaders to accelerate reloading. 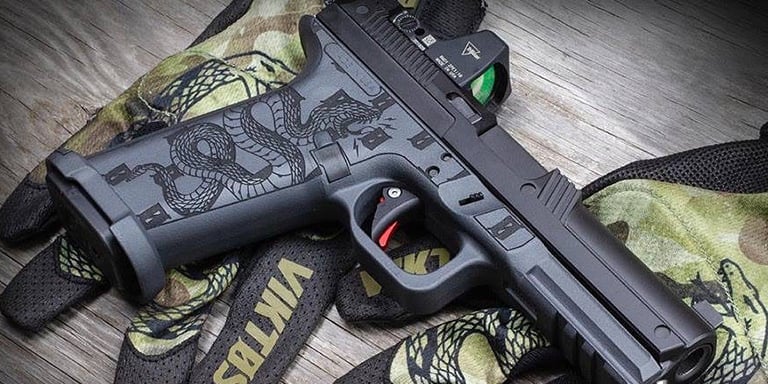 While some of the stationary and moving parts found on a revolver are also present in a semi-automatic handgun, the weapons function much differently. The front and rear sights, trigger, trigger guard, hammer, and muzzle all have the same location and function as the revolver.

The Parts of a Semi-Automatic Handgun and Their Functions

The Grip:
The grip on the semi-automatic handgun isn't just the handhold for the weapon. The grip is hollow and houses the weapon's ammunition in a magazine. The bottom of the grip is open and is called the magazine port or loading port. It also has a magazine release button within the grip.

The Magazine:
The magazine is a removable ammunition feeding and storage device. It can be separated from the weapon when empty and replaced with a full magazine. Cartridges are stacked against spring tension which allows the magazine to feed each round into the weapon's chamber. Magazines allow semi-automatic handguns to fire more rounds than revolvers and are much faster to reload. In recent years, the capacity of magazines has come under scrutiny and many states now regulate the number of rounds that a magazine is legally permitted to hold.

The Magazine Release:
This is a button generally located in front of the grip behind the trigger guard. When a loaded magazine is inserted into the weapon, the shooter will hear an audible click. This is the magazine release mechanism locking the magazine in place. In order to remove or replace the magazine, the shooter must depress the button. Most magazines will drop from the weapon when the button is pushed, making reloading much quicker.

The Slide:
This is the top portion of the weapon. It is the part that slides back and forth when the weapon is fired. The slide must be pulled back and released to load a cartridge into the chamber. When the bullet is fired, three things happen. The recoil forces the slide to the rear. As this happens, the extractor, which is attached to the slide, removes and ejects the spent cartridge. The rearward action of the slide also re-cocks the hammer for the next round. As the slide moves forward, it pushes the next cartridge out of the magazine and loads it into the chamber.

The Safety or Decocking Lever:
Many (but not all) semi-automatics will have a decocking lever, which is also referred to as a safety. It will usually be located below the rear sight. This is a two-position lever. If a weapon has the hammer back in the cocked position, the shooter may lower the hammer by using the decocking lever. A second feature of the decocking lever is that in the down or safe position, the weapon will not fire. The shooter must move the lever up to the fire position for the weapon to function.

The Takedown Lever:
These levers will be slightly different depending on the manufacturer. They are located above the trigger, but just below the slide. The lever serves to release the slide and barrel to field strip the weapon.

The Slide Stop:
Also known as the slide release, this is a lever located behind the takedown lever. The slide stop's function is to lock the slide in the rear open position after the last round in the magazine is fired. Pushing down on the slide stop releases the slide, allowing it to snap forward. With many semi-automatics, forcefully seating a fresh magazine will cause the slide release to disengage and the slide will cycle forward. 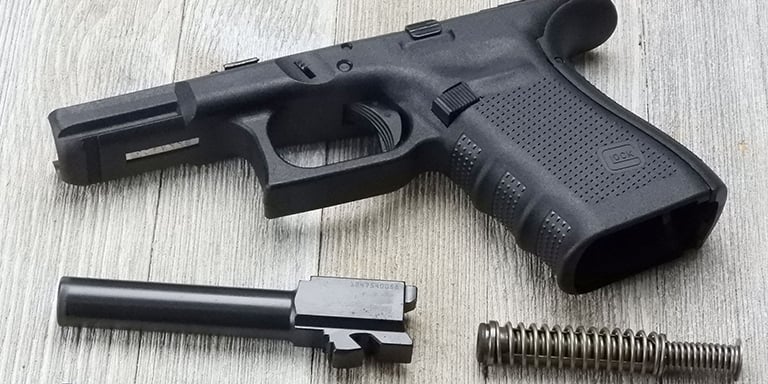 Having a working knowledge of your handgun and its parts is essential. Each shooter should understand the various components that go into their firearm and how they function. Learning the proper names of the weapon's parts will allow the shooter to communicate accurately and professionally.