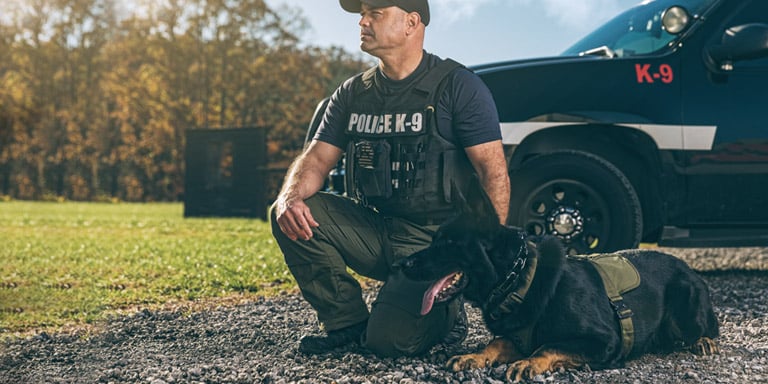 Before a police officer calls on a K9 to sniff a car or complete a search, it's essential to understand a little about a police dogs' remarkable sense of smell. Three distinct differences from humans contribute to their awesome nasal capabilities. For one, dogs possess about 300 million olfactory receptors in their nose, or about fifty times as many as humans.

A dog's nose works differently than a human's. When we inhale, air is directed in one path: past the olfactory receptors and into the lungs. When a dog inhales, however, air flows along two different paths. Up to twelve percent of the air dogs breathe is diverted from the lungs, going directly into a recessed area full of olfactory receptors.

The third important distinction is that the portion of a dog's brain that detects differentiating odors is proportionally much larger than a human's. Dogs have the unique ability to identify one particular smell or scent and differentiate it from all others. As a result of their unique biology and centuries of domestication, dogs are invaluable partners, aiding in several aspects of law enforcement.

Searching or Sniffing for Drugs

The most common substances detected by police dogs are drugs. The two most common situations that require a K9 unit are a search warrant for narcotics and at a car stop. Every time a drug search warrant is executed, a K9 trained to detect drugs may be used to search the premises. In this situation, the probable cause is already established when a judge authorizes the search.

Detecting or sniffing out drugs in a vehicle from the outside is much different. A specially trained dog is escorted around the exterior of a car, sniffing for the scent of specific illegal drugs. The dog is not completing a search (as defined by the law), but rather sniffing the vehicle to detect drugs. The dog's handler is watching for the dog to indicate that drugs have been detected. Each dog is trained to react a specific way if they smell drugs. A K9 alerting officers to the presence of drugs while outside of a vehicle can establish probable cause for a search under the law.

Many rules and procedures governing the use of K9 searches are the result of U.S. Supreme Court decisions referred to as case law. In addition to these decisions, each state has its own case law which officers and lawyers must study and understand. A K9 search that is legal in one state may be illegal in another. Many states are more restrictive than federal case law. 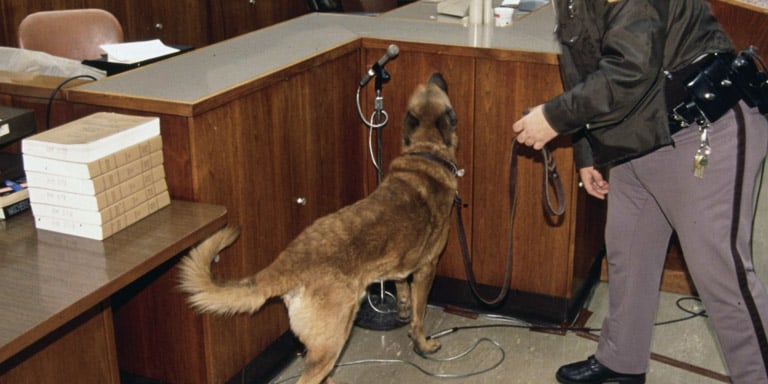 There is more case law regarding dogs sniffing for drugs than any other K9-related activity. A drug dog must be specially trained in the detection of illegal drugs and regularly tested & retrained. Each time a K9 unit is used to detect drugs, the case should be documented. All training and testing should also be documented. This documentation builds a clear record of the dog's reliability. This record can be necessary in court should the dog's reliability or training be questioned. Here is some well documented and commonly cited case law relating to K9 units.

This 2005 US Supreme Court ruling allows a drug-sniffing dog to be used during a routine traffic stop without violating the Fourth Amendment. Even though there is no suspicion of possession of narcotics, a drug dog sniffing a vehicle is permitted and is not considered a police search under the law (and, therefore, does not require a warrant).

In 2013, the U.S. Supreme Court addressed the training and the necessity of records documenting a particular dog's hits and misses. The court ruled that a police dog's certification and continued training are an adequate indication of its reliability and are sufficient to presume that the dog's alert provides probable cause to search, using a totality-of-the-circumstances legal standard. The court did, however, allow defendants to challenge a particular K9's training, testing and overall reliability.

In this 2015 U.S. Supreme Court case, the court ruled that unless an officer has a reasonable suspicion that a car contains drugs, they can't extend the length of a car stop to allow for a K9 unit to arrive. The officer can only keep a vehicle stopped for the period of time necessary to address the traffic violation that warranted the stop. This includes completing standard credential checks, warrant checks and the issuance of tickets or warnings.

This 2017 Colorado Court of Appeals case involved the detection of marijuana in a state where the substance is legal. That court held that when a dog is trained only to detect unlawful substances like cocaine, heroin and methamphetamine, a sniff of a car is not considered a search. However, when a dog is trained to detect both legal (marijuana) and illegal substances under Colorado law, the sniff becomes a search, and that search is no longer legal without a warrant. 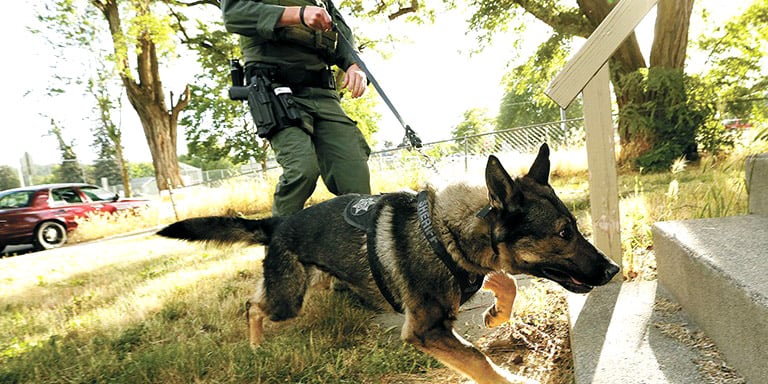 A tracking dog is trained to identify and track a particular scent. This scent usually belongs to a person. Dogs are given an article of clothing or something likely to have a person's scent on it. The dog can quickly identify the scent and differentiate it from all others. In order to do this, dogs have a secondary olfactory organ known as the vomeronasal organ (or Jacobson's organ), which human beings do not have. This organ is essential in tracking. It picks up pheromones specific to each animal species.

Walking through the woods during a track, a dog may smell many different odors of various animals, but they can easily differentiate them from that of a human. They can also distinguish the smell of a specific person from all other people.

Uses for this type of search include a missing or lost person, or a search for a fleeing offender. Missing persons cases where a dog is requested are usually for small children who wander off and get lost or for older adults who may have mental disabilities such as Alzheimer's disease or dementia (learn more about this important topic in our officer's guide to serving those with a mental disability). Searching for a fleeing offender is usually much more direct: the person in question was last reported at a particular location, which is where the tracking dog picks up the scent.

The final and much less common type of police dog search is one following a mass casualty event, such as an earthquake or strong tornado. Search and rescue teams travel to the affected area and immediately start attempting to locate victims concealed by debris. Dogs help by using their keen sense of smell to find survivors under the rubble. 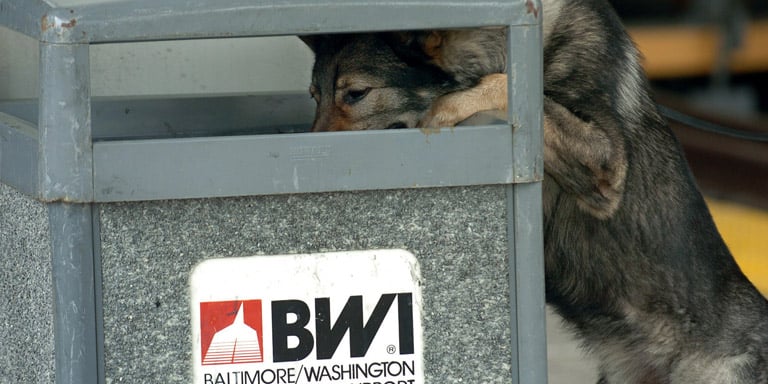 Just behind the certified drug-sniffing dog in speciality is the certified explosive detection dog. These can either be a cross-trained police dog or a specially trained, single-purpose dog. In a time where both large and small terrorist acts are possible, the K9 explosive detection dog is growing in popularity. These dogs are deployed full time in both state and federal buildings, as well as airports and mass transit facilities.

Similar to drug detection dogs, explosive detection dogs are trained to detect a specific set of smells common to explosives. Unlike police K9s, a bomb detection dog may be selected from a wider variety of breeds. 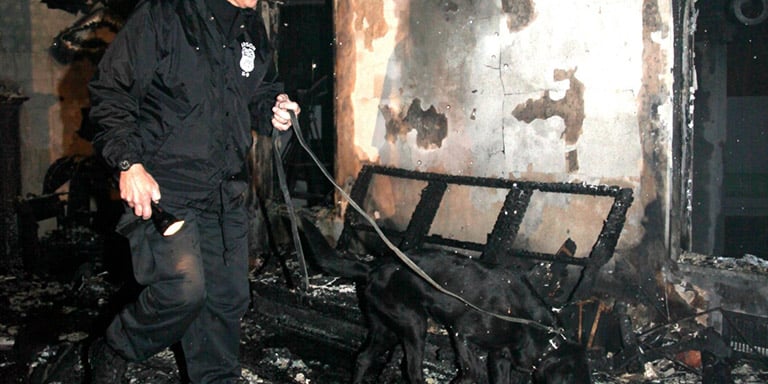 Both police department and fire department arson investigators use dogs specially trained to detect accelerants. Accelerant detection canines (ADCs) serve several purposes. Many people believe that once a fire is extinguished, an arson investigator will bring in an ADC whose sole purpose is to check for traces of accelerants. This is an important task, but not necessarily the dog's first or only task.

A good ADC can also be used during the fire to work the surrounding crowd. It is common for some arsonists to stand among onlookers, watching the building burn. The ADC can be quietly walked through the crowd to identify a person with a minute amount of accelerant on them. Many ADCs are friendly, non-threatening breeds such as Labrador retrievers. The dog may walk up and sit next to the arsonist wagging its tail as police take the person into custody. 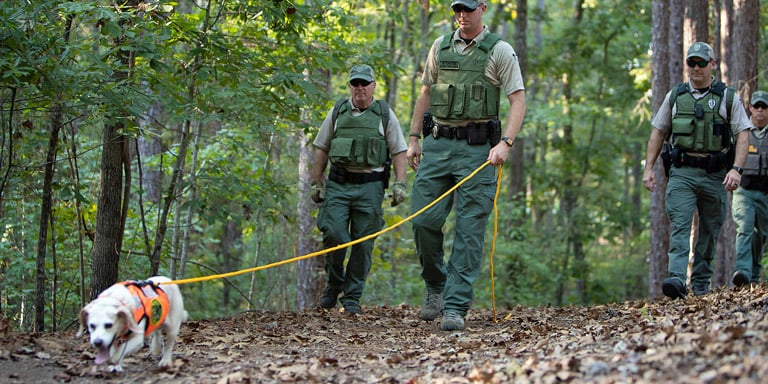 One of the least discussed yet most essential types of K9s are cadaver dogs. They are trained to detect the faintest scent of a deceased individual. The person may be buried in the ground by a criminal or buried in a mud-slide. Either way, these dogs will do as they are trained and find bodies so they may be recovered. They can detect something as small as a single drop of buried human blood. These are the last search and rescue dogs to work a mass casualty scene.

K9 dogs have been a crucial part of police work for many years. Their unique ability to detect and discriminate between trace scents has made them invaluable in many different police missions. They continue to find lost persons and help apprehend fleeing fugitives. They can sniff out a drug stash, an explosive device or an arsonist with equal ease. They accept every task, displaying the energy of a teenager and excitement of a wagging tail.