Officer's Guide to Serving Those With a Mental Disability 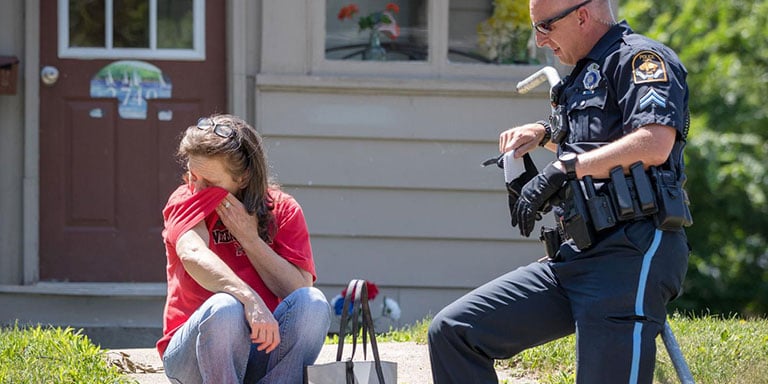 Today's police officers must be prepared to help people in various states of distress. One of the most challenging will be serving the needs of people who are mentally disabled or suffering from a mental disorder. This refers to a broad variety of mental health conditions. The more common conditions an officer may encounter include Autism Spectrum Disorder, Schizophrenia, Bipolar Disorder, Post-traumatic Stress Syndrome, Alzheimer's Disease and Dementia.

Officers have to communicate with people with mental disabilities without causing them greater fear or confusion. This will be a difficult task for any police officer. The goal is to get the person the treatment they need by a medical professional. This must be completed by communicating with the individual, overcoming their fears and assisting them in their travel to a medical facility. 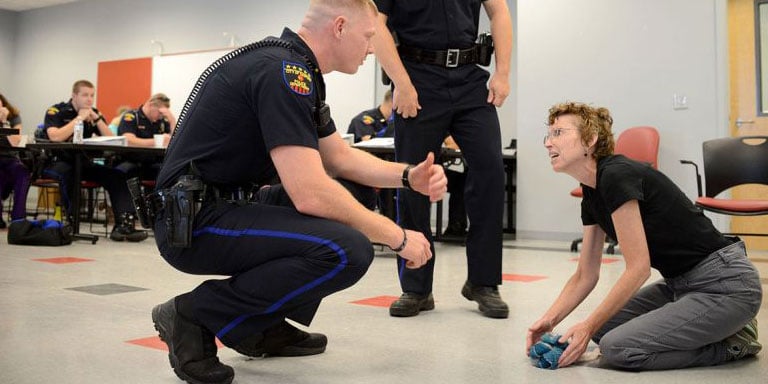 Police departments nationwide work to train police officers in the best practices for dealing with persons exhibiting signs of a mental disorder or condition. The most widely used program is the Crisis Intervention Team (CIT). The full CIT training certification is an intensive forty-hour course. It usually consists of thirty-two hours of classroom training and eight hours of practical exercises. The practical exercises allow each officer to interact with a person acting in a state of distress. It is up to the officer to communicate with the person and address their concerns and put them at ease. In many cases, this will involve helping to lower their aggressive or agitated state using de-escalation techniques. These include active listening, displaying a calm and open demeanor, expressing a willingness to help make things better and, when appropriate, displaying empathy.

Not every police officer will receive full CIT certification. However, every officer should at least receive the eight-hour course. Most police academies have integrated CIT and de-escalation training into their curriculum. It is also important for emergency Telecommunications Operators (TCOs) to receive specialized training in this area as it pertains to communication skills over the phone.

Why Understanding Disorders is Important 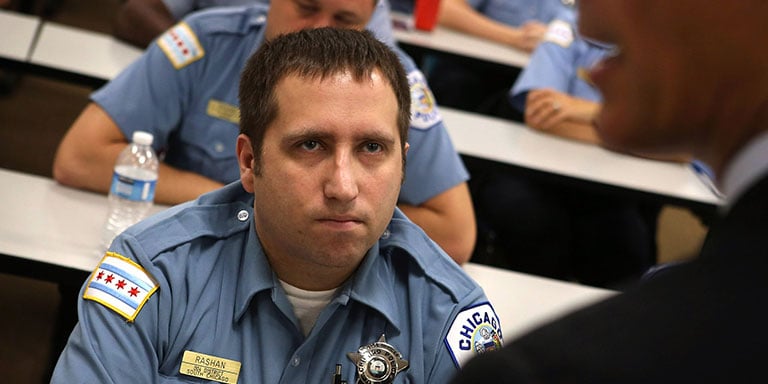 Police officers should have a basic understanding of common types of mental disorders so they can interact with a person in distress with the greatest likelihood of success. One example is that of a person with autism. An untrained officer might take the person by the arm and say "look at me when I'm talking to you." In this case, that would be the wrong thing to do. Most people with autism avoid eye contact and hate to be touched by strangers. It's easy to see why this training is so important.

According to the National Institutes of Health, it's estimated that one in sixty-eight children in the United States suffers from Autism Spectrum Disorder to some degree.

Autism is a disorder with a wide variety of common behaviors. Every individual is different and not all behaviors will be present in each person. A person with autism may be overwhelmed by the mere presence of the police. This fear could cause a fight-or-flight response. Many have delayed speech skills and may not react to verbal commands. They tend to avoid eye contact and often engage in repetitive behavior such as rocking or spinning. A missing autistic child is of particular concern as their sense of danger may be impaired. They often wander and can be drawn to bodies of water, traffic or other dangers.

If a police officer identifies that a child or adult may have autism, they should respond in a way that best reaches the individual.

When interacting with a person with autism, it is important to give that person a lot of space. Use simple yet direct sentences, giving the person extra time to process and respond to what is said. Loud noises and quick movements should be avoided and the officer should refrain from touching the person, except when absolutely necessary. Information received from a family member or person providing care can be helpful regarding the best way to communicate. 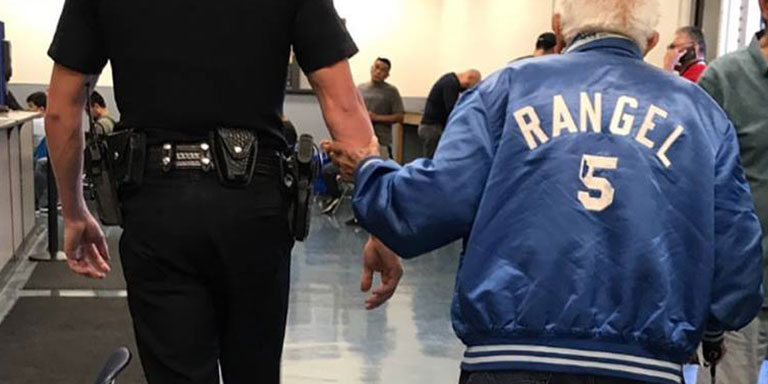 According to the National Institutes of Health, more than five million persons in the United States have Alzheimer's. Alzheimer's is a disease that progressively causes the loss of memory and other cognitive functions.

Dementia is the general term associated with a decline in mental ability so severe as to interfere with daily life. Dementia is the common result of the onset of Alzheimer's disease and is most common in persons in their sixties or older. There is no known cure for either condition.

Police officers must know the warning signs of people with dementia. The most easily recognizable symptoms are memory loss and disorientation to time and place. The person in distress may not remember their name or their address. They may seem disoriented and confused. This condition often leads to the person wandering off on foot or driving off in a vehicle. People affected become confused, as nothing looks familiar, even in their own neighborhood.

Two frequent calls police respond to are missing persons who wandered off and for older persons located by others who can't provide their identity or address. When attempting to ascertain the person's identity, check for a medical identification bracelet or pendant. These are made available by the Alzheimer's Association's Wandering Support Program.

Police may also respond to calls for assistance made by the afflicted person. A theft may turn out to be a misplaced item that the officer can assist the person in finding. A reported burglary or a stranger entering the residence may turn out to be a close relative or caregiver the person does not recognize. All calls for help should be treated as legitimate until proven otherwise.

Officers need to identify themselves as police officers and explain why they are at the scene. When talking to a person with dementia, the officer should speak slowly and use simple words, asking yes or no questions. The officer should always be patient and wait for a response. The officer should maintain a calm, quiet environment free of flashing lights, sirens, and loud radio transmissions.

Confrontations should be avoided, as well as reality checks that may further confuse or agitate the person. Restraints should only be used as a last resort. It is always necessary to use care, compassion and understanding when dealing with dementia. 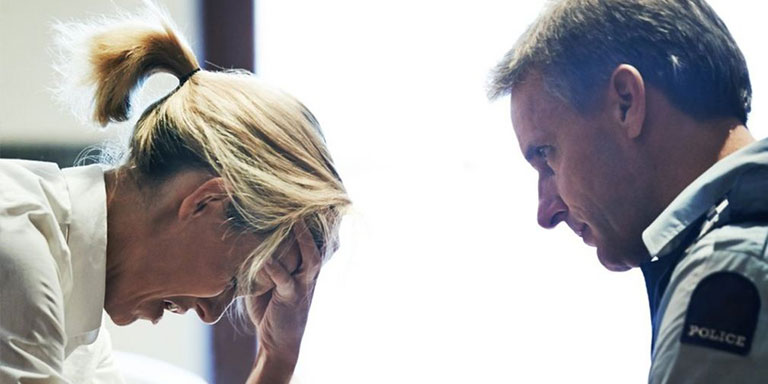 Schizophrenia is a long-term mental disorder. A person with schizophrenia may experience hallucinations and delusions. Hallucinations will cause the person to see or hear things that are not there. Delusions are a flawed thought process where the person believes in things that aren't true. Those afflicted will often withdraw from reality into a fantasy or delusional state.

Police will often be called when a person who has schizophrenia has a psychotic episode. Usually, assistance is needed to control the person's behavior and assist in getting them medical treatment.

While a police officer may not always be able to identify a person as schizophrenic, they will usually observe enough abnormal behavior to determine the person is in a state of mental distress and needs transportation for medical treatment.

The officer should communicate in simple, non-argumentative terms, letting the person know that no harm will come to them and that the officer is only there to help. Try to keep the person focused on what is real and explain what will happen before anything is done. The officer should use caution in dealing with a person exhibiting signs of schizophrenia as they may act out unexpectedly. 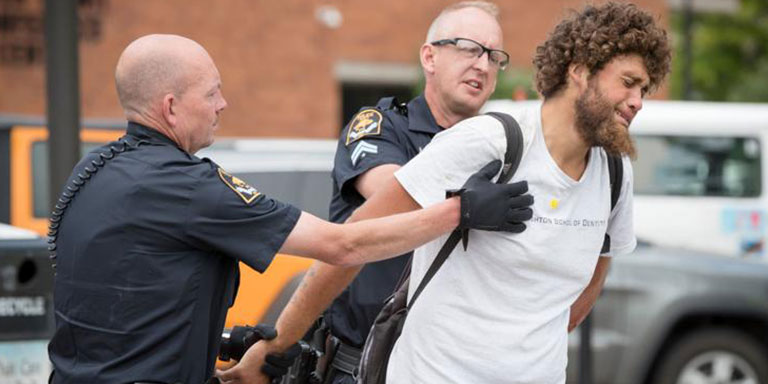 Bipolar disorder is characterized by strong mood swings that range from extremes of high-energy gleeful moods to low, depressive periods.

During depressive episodes, a person may lose interest in all activities. They may have a sense of sadness and low self-worth. Suicidal thoughts are common and should not be dismissed by the responding officer if informed by family members.

Police will sometimes be called by a family member when a person is having a depressive episode involving suicidal thoughts or actions. It will be important to have an open-ended dialog with the person. It's often helpful to tell the person, "I'm here to help you," or "How can I help you today?" If the person will talk to the officer, it's important to be a good listener. Let them know that they are not alone in this difficult time and recommend that they talk to a mental health counselor. The officer should also arrange transportation for the person to a mental health professional, who is usually available at a local hospital.

At the other end of the spectrum are manic episodes identified by increased activity and energy. A manic episode can make a person feel extremely happy or overconfident. Taken to the extreme, they will have a very inflated sense of self-importance and increased high-risk behaviors.

The police will be called if, during a manic episode, a high-risk behavior causes damage or injury to a bipolar individual or others. While the high-risk behavior may be considered a violation of the law, a person having a manic episode is having a mental health crisis. Even if taken into custody, they should be transported for medical evaluation. 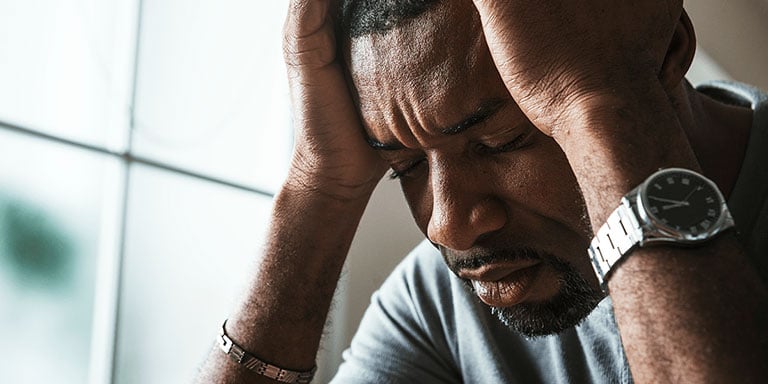 Symptoms of PTSD include invasive memories of the traumatic event, including flashbacks. Extreme physical reactions to reminders of the event are also common. The person may avoid places or activities that bring back a memory of the event. Many people with PTSD will feel emotionally numb and detached from others. They may also experience nightmares — in general, or about the specific event. Over time, depression and suicidal thoughts will indicate that outside assistance is needed.

A person showing signs of PTSD should be assisted in meeting with a qualified mental health professional. Symptoms may be as mild as expressing concern about nightmares or as critical as reliving an event in combat as if it were currently happening. In extreme cases, a police officer called in to help may have to immediately respond to the person's behavior, protecting them and those around them from harm.

It is vital for police officers to understand the causes and symptoms of PTSD, as they may experience this disorder themselves. Police officers are always the first to arrive at every type of traumatic scene or tragic event. This repeated exposure may take a toll on an officer's emotional health. Police officers work to help others with mental health issues and cannot afford to ignore their own well-being or mental health.

Police officers continue to train to better serve the needs of the community. Crisis Intervention Training is a valuable tool for all officers who answer calls for service. Most departments will have specific policies regarding the treatment of persons with mental disabilities, which should be followed. The police officer's mission is to communicate with the person, causing as little fear and apprehension as possible while getting the individual the medical treatment they need and keeping them safe in the process.