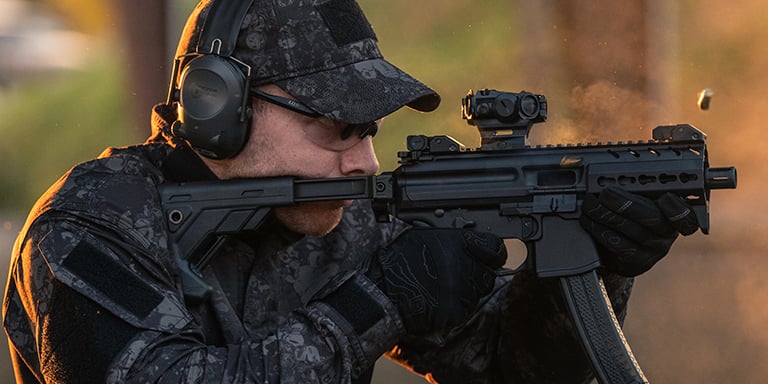 From the flintlock pistols and rifles of the Revolutionary War to the six-shooters and lever-action rifles that tamed the West, firearms are an essential part of American history. These firearms all fall into one of three categories: handguns, rifles or shotguns. While each type has evolved over several centuries and undergone improvements in quality, efficiency and design, the basic functions remain unchanged. 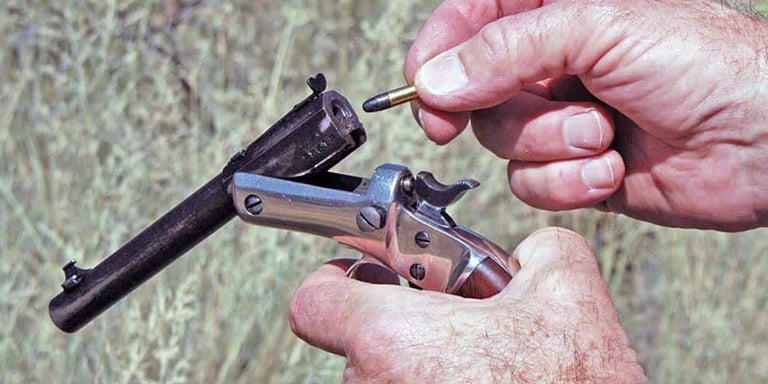 The earliest American single-shot pistols were flintlocks. With the invention of the percussion cap in 1806, flintlocks became obsolete, as using a percussion cap made reloading somewhat quicker. Revolvers soon began using percussion caps as well. Then, in the 1860s, rimfire cartridges (and later, centerfire cartridges) were introduced. The six-chambered revolver quickly replaced the single-shot handgun with one exception: the single-shot Derringer remained popular as a concealed weapon. The Derringer may have been the first reliable, close-quarter combat firearm favored by gamblers who didn't want to tip their hand.

The Evolution of the Revolver 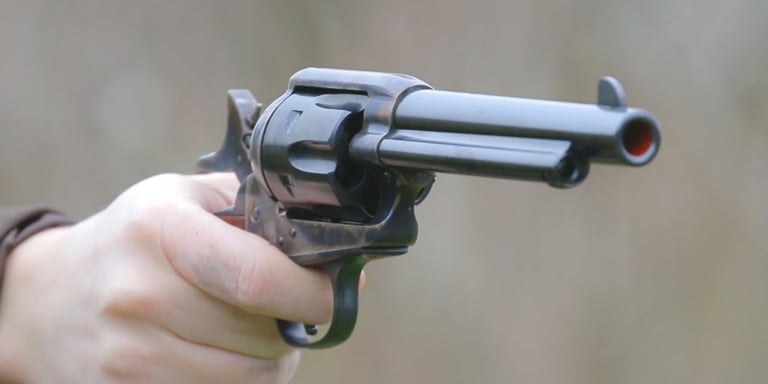 Invented by Samuel Colt, revolvers got their name from how a round configuration of cylinders rotate (or revolve) around a fixed barrel, one chamber at a time. Early revolvers were introduced in the 1850s; however, at the time, they still used percussion caps, which made reloading a multi-step process. The next generation of revolvers used a centerfire cartridge complete with primer cap, powder, and bullet.

The best known revolver of the era was the Colt 1873 Single Action Revolver, also known as the Colt Peacemaker. This was the weapon selected by both the United States Army as well as most cowboys, lawmen and gunslingers. A single-action revolver means that the shooter pulls back the hammer manually. The trigger pull causes one single action: the release of the cocked hammer to strike the cartridge, firing the weapon. The double-action revolver was introduced in the mid-1880s. With a pull of the trigger, the hammer is pulled back and released, firing the gun. The revolver remained the first choice of police departments for the next hundred years, until departments began switching to semi-automatics in the 1980s.

The Introduction of the Semi-Automatic Handgun 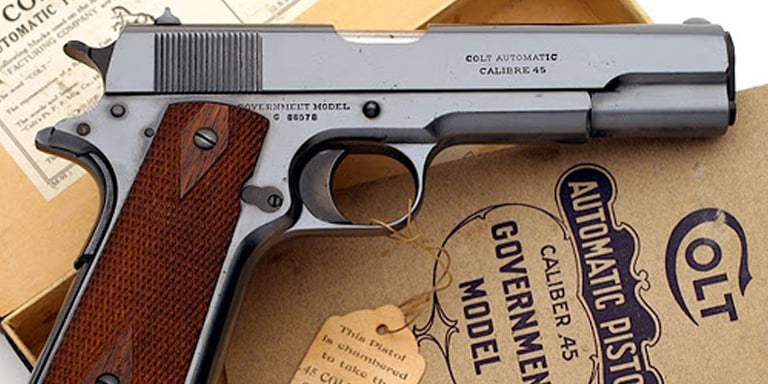 The semi-automatic handgun started in the United States with John Browning, who designed the M1911 (also known as the Colt government, or Colt 45). This forty-five caliber handgun was the issued armed forces sidearm from 1911 until 1986. It saw action in both World Wars, Korea and Vietnam. In 1986, another semi automatic, the Beretta M9, replaced the M1911A1.

Law enforcement agencies carried mostly .38 caliber Smith & Wesson Model-10 revolvers for many years. Another popular model was Smith & Wesson’s snub-nosed .38, also known as the Chiefs' Special. The weapon was lighter and smaller with a short barrel, making it more comfortable for chiefs and other members of the brass to carry. It was also popular with detectives who could easily carry the weapon concealed.

During this period, it was an Austrian curtain rod manufacturer named Gaston Glock who would have the greatest impact. He started introducing the Glock 17 and Glock 22 to police agencies. The weapons were light, almost indestructible and featured a large, fifteen-round magazine capacity. The Glock’s trigger squeeze was much lighter than revolvers which helped police officers become better shooters. Glock, seeing that the firearm of police would also be popular with civilians, offered deep discounts to police departments purchasing the weapons. Today, at least 65 percent of police officers in the United States carry Glock semi-automatic pistols in a variety of calibers. 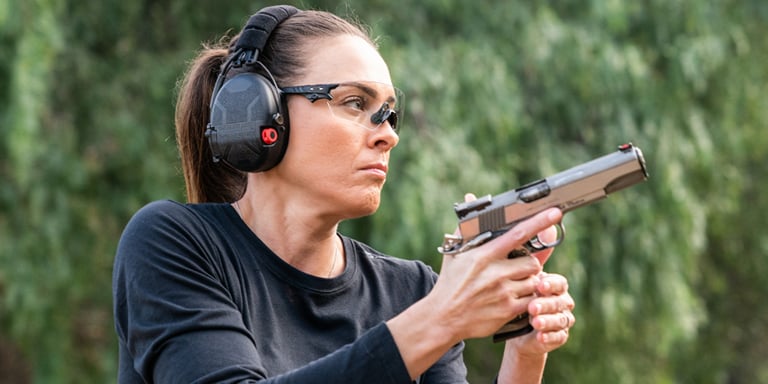 Handguns continue to appeal to a growing civilian market. Several high-end manufacturers compete for a tight market of competitive shooters. Many firearms are customized to an individual shooter’s specifications.

Women are now a significant segment of the gun-owning and shooting population. Once unheard of, it's not uncommon to see a hot pink handgun on the range. A growing and diverse population of shooters are embracing target shooting, which is great for the sport. Personal protection continues to rank high on the list of reasons for private gun ownership and proficiency.

The selection of revolvers and semi-automatics has never been greater. Many models are offered in multiple calibers, from rimfire .22 shorts up to .50 caliber Desert Eagle and Smith & Wesson handguns. Today, there's a handgun right for every shooter. 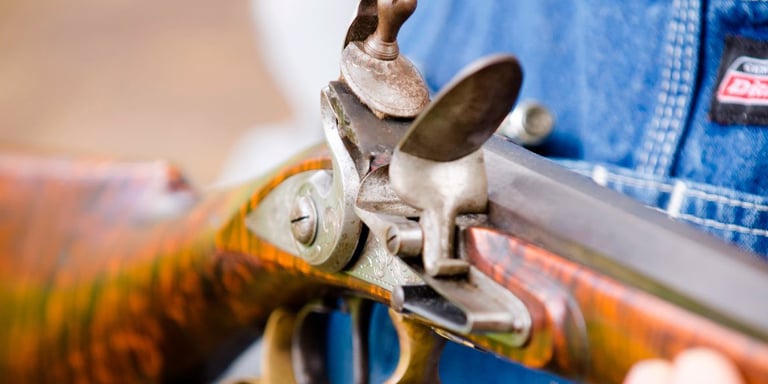 Just like the pistol, the single-shot rifle started with the flintlock in the early days. Loading a flintlock rifle was both difficult and time-consuming. Two different types of powder were often carried — gunpowder was used to propel the bullet and flash powder was used to accept the spark from the flint. Loading a flintlock rifle required pouring powder down the barrel, followed by a lead ball and wadding. A ramrod was used to compress them in the barrel. Powder was then placed in a flash pan. The powder was difficult to keep dry during rainy weather, and the weapon was challenging to reload from a position of cover.

The next great breakthrough was the percussion cap. The caps did away with the need for the flint, the striker, the flash pan and the powder. A cap was placed in front of the rifle's hammer. When the hammer struck the cap, it ignited a chemical, sending a spark to the chamber. Most single-shot rifles were replaced by lever-action models that were made possible by the invention of centerfire and rimfire cartridges. 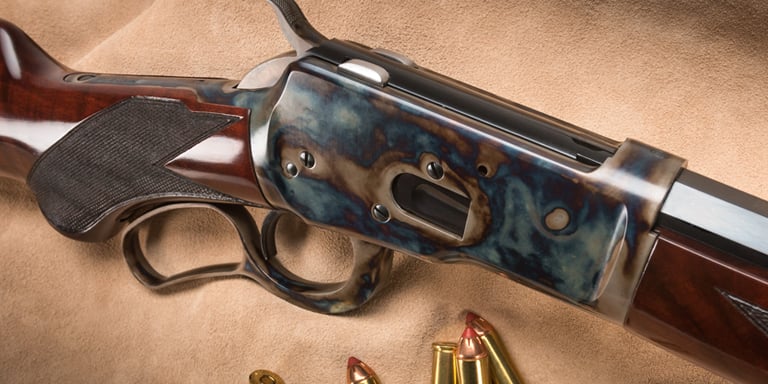 Oliver Winchester was a shirt manufacturer. In 1857, he purchased the Volcanic Repeating Arms Company which, ten years later, would become the Winchester Repeating Arms Company. Winchester combined self-contained cartridges with a lever-action mechanism, allowing rifle rounds to be fired quickly and accurately. With each pull down and back on the lever, the chamber opened, extracting a spent cartridge. Pushing the lever forward and up reloaded a fresh round in the chamber. The Winchester lever-action rifle was so popular it carried the unofficial title of "the rifle that won the West." 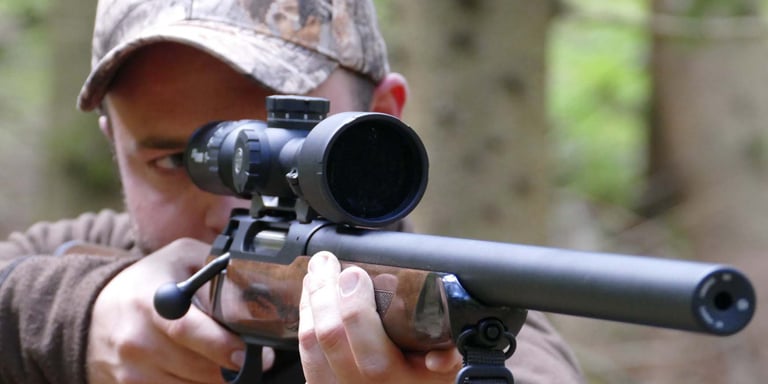 Bolt-action rifles have been around since the early 1800s but are best known throughout history for their use in the military. The Model 1903 Springfield bolt-action rifle used a .30-06 cartridge and was used by the United States Military from 1903 and into the 1960s.

Today, nearly all match-competition rifles, sniper rifles, big game hunting rifles and even rifles used in the Olympics depend on the extreme accuracy of the bolt action. 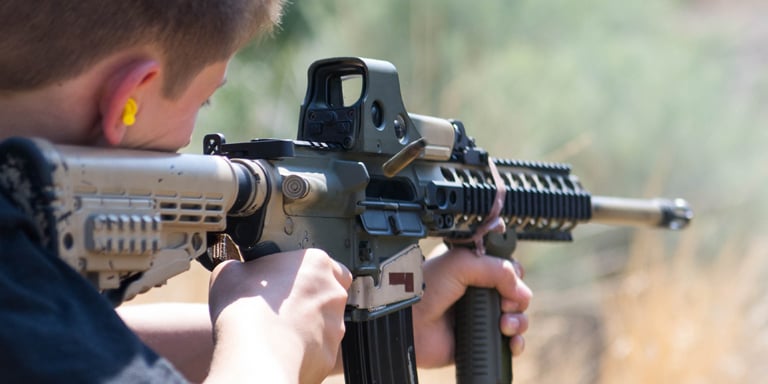 The semi-automatic rifle was a giant step forward in rifle technology. It operates on the same principle as the semi-automatic handgun: the recoil from the fired round ejects the spent casing and cycles the next round into the chamber. Each time the trigger is squeezed, another round is fired until the weapon runs out of ammunition. An elementary yet essential distinction must be understood — with each pull of a semi-automatic rifle’s trigger, the weapon fires one bullet. Any weapon firing multiple rounds with a single squeeze of the trigger is a fully automatic weapon, often referred to as a machine-gun.

Each state determines its own definition of what constitutes an assault weapon. In some states, it may be as simple as the amount of ammunition a gun holds. In others, a list of objectionable items is compiled, and weapons possessing three or more are called assault weapons. A typical list might include a flash suppressor, a pistol grip, a detachable magazine or an expandable stock. It's essential to learn and understand the laws of your state and always remain on the right side of the law. If your state restricts the use of assault rifles, make sure your firearm is in compliance. 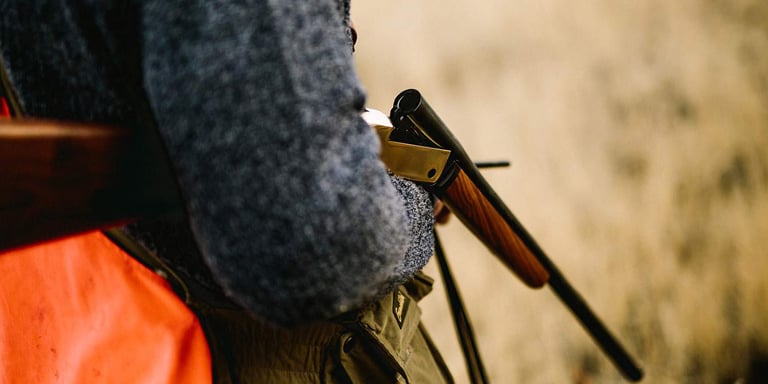 The single-shot shotgun is a very simple weapon. Most open at the breech and are called break-action models. They allow the shooter to place a single shotgun shell into the chamber. The shotgun is snapped closed and is ready to fire. This kind of shotgun was designed to fire a group of small projectiles called shot (or pellets) at a bird or other game. Because the shot is dispersed in a pattern, the shooter has a better chance of bringing down the animal, which may be hit with a few pellets. Traditional shotgun barrels were smoothbore weapons, meaning their barrels had no rifling. This design helped to stop projectiles from tumbling in flight. 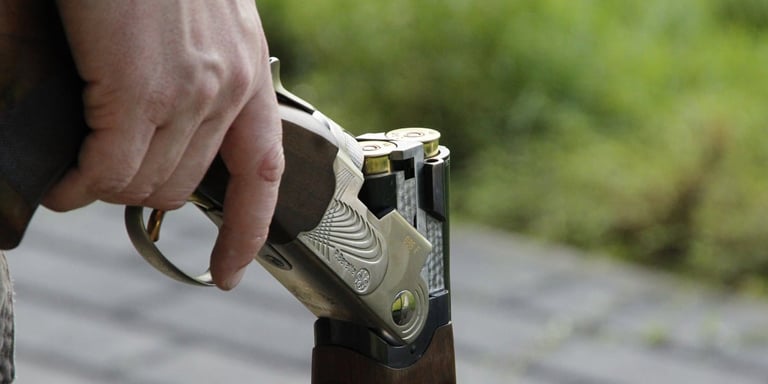 Few weapons strike as much fear into the hearts of adversaries as looking down the business end of the famed 12 gauge, double-barreled shotgun. The common load of the double-barreled shotgun was usually 00 buckshot — That's twelve .33 caliber bullets fired at once (and that's just one barrel). While a shotgun is a sporting weapon, it is also a formidable home defense weapon.

Double-barreled shotguns come in two varieties: side-by-side barrels or over-under models. Each has two triggers — one for each barrel. Today's double barrels can be chambered with two different gauges or one smooth barrel and one rifled barrel. The rifled barrel is made to accept rifled slugs (helping them to spin rather than tumble), similar to the lands and grooves in rifle and handgun barrels. Double-barreled shotguns are set with each barrel at a slight angle, sometimes called the regulation. This design ensures that when both barrels are fired, the patterns will intersect, usually at about thirty or forty yards out. 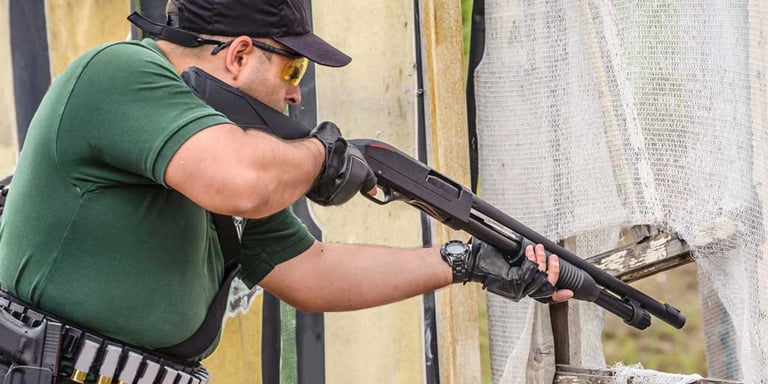 While pump-action shotguns are used as sporting guns, they have long been the staple of police departments, too. The mechanical action of the fore-grip being pulled opens the chamber and ejects any spent shell casing. A fresh round is fed from the magazine tube into the chamber by pulling the foregrip forward, which also locks the shell into place. The loading action of the foregrip can be compared to the movements of a bolt-action rifle. No other sound in police work demands the same level of compliance as racking the action of a pump shotgun. 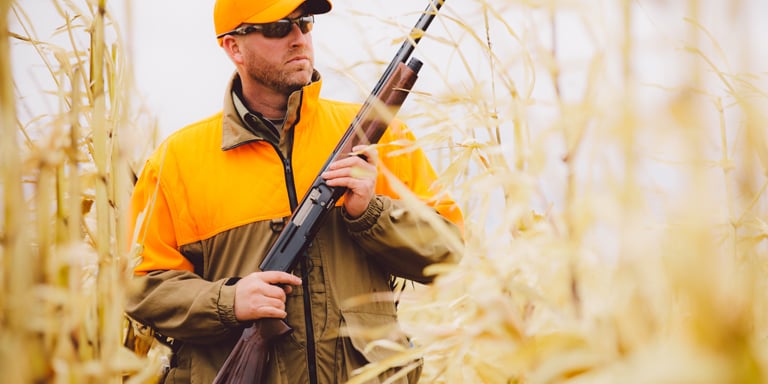 Semi-automatic shotguns, much like all semi-automatic weapons, allow the shooter to concentrate on making their shots. Once the firearm is loaded and charged, it will fire with each pull of the trigger until it’s empty. Many sporting shotguns have their magazines plugged to allow only three rounds in the weapon at a time. Hunting regulations are different between states, so hunters should make sure their guns are always in compliance.

Semi-automatic shotguns are enjoying greater acceptance by the law enforcement community, replacing many pump-action shotguns from the 1970s.

Handguns, rifles and shotguns of all types continue to be popular. Even flintlock muskets are still carried by those who enjoy Civil War reenactments. There is room for responsible firearm ownership and mastery in every possible category. Stay safe, and happy shooting.