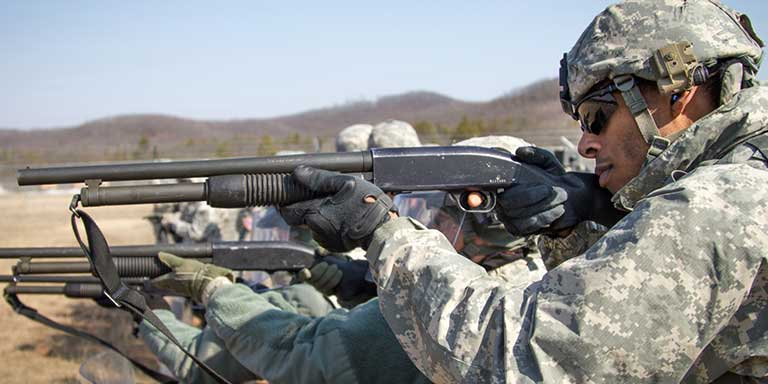 Shotguns are a very distinctive category of firearms. While they are primarily used for hunting, shotguns are also used in trap-shooting, skeet-shooting and sporting clay competitions. Shotguns also have a long history as both law enforcement and military weapons. 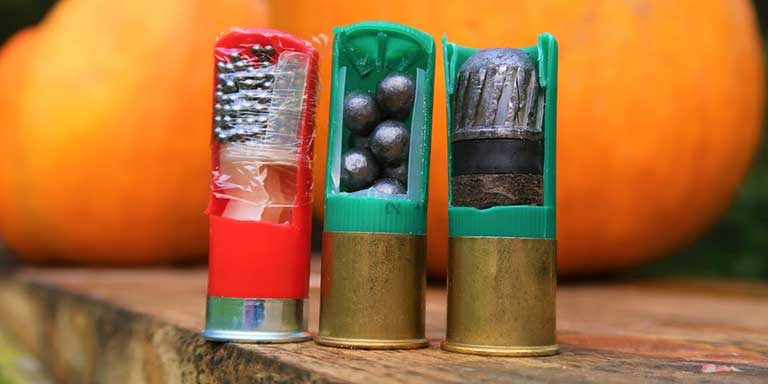 Shotguns are the only category of weapons that can launch multiple projectiles with a single discharge. The diversity of projectiles a shotgun can fire makes it an adaptable and unique weapon. There are three common types of shotgun shell.

The type of shell selected will vary based on the weapon's intended purpose. If you're hunting for small game such as waterfowl, birdshot may be the best shell to use. This load will contain fifty or more small, round metal projectiles which, when fired, will create a shot pattern. This pattern Increases the odds of hitting a moving target without over-penetration.

If you're hunting a larger animal, buckshot is the preferable shell to use. The load will contain nine or more large, round metal projectiles, which provide much greater stopping power with more penetration.

The final class of ammunition is the rifled slug. In effect, this shell turns a shotgun into a rifle, as the shell contains one large bullet with spiral grooves on the sides. These grooves cause the bullet to spin while traveling through the smooth-bore barrel of a shotgun, increasing its accuracy. 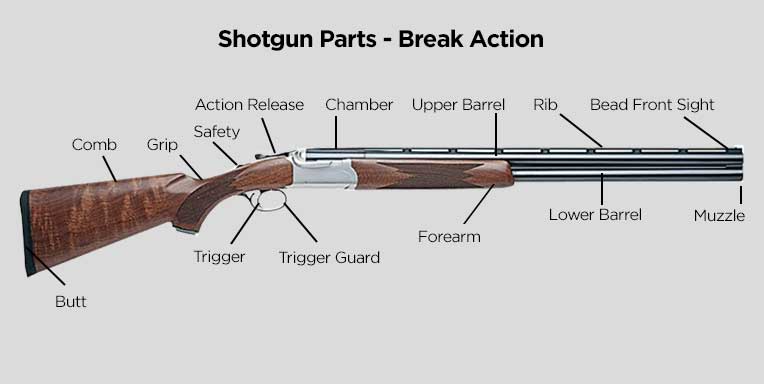 There are three main types of shotguns based on the weapon's action, or loading mechanism. The first type is the manually loaded single or double-barrel shotgun.

The action
Both single and double-barrel shotguns are usually break-actions, meaning they pivot, opening at the breech, exposing the firing chambers and allowing them to be manually loaded by dropping a shell in the chamber.

The hammer
Single-shot shotguns will have one hammer while double-barrel shotguns will usually have two. Many models are single-action, meaning the shooter has to manually cock the weapon by pulling back the hammer(s) until they lock. Some double-barrel shotguns have no hammer showing and the weapon is automatically cocked by the force of the shooter opening the break-action to reload.

The barrel
A single-shot shotgun will usually have a smooth bore barrel. This means the barrel does not have the lands and grooves present in a rifle barrel. Some double-barrel shotguns will have one smooth-bore barrel and one rifled barrel, for use exclusively with rifled slugs.

The barrel length depends on the purpose of the weapon. The standard barrel length is between 26-28 inches. Weapons designed to shoot fast-flying waterfowl can be a couple of inches longer. Police riot shotguns need to be maneuverable in close quarters, so their barrel length is usually shorter (18-20 inches).

Extractors and ejectors
Most single and double-barrel shotguns have an extractor mechanism that lifts the spent shell casing partially out of the chamber when the action is opened. This allows the shooter to easily remove and replace the shells. Many newer models (especially double-barrels) also have ejectors. When the action is opened quickly, the spent shells are completely ejected from the weapon, allowing for quicker reloads. 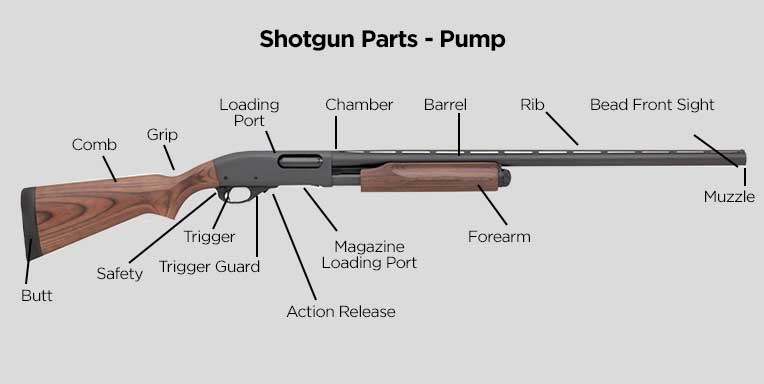 The pump-action shotgun is faster at cycling additional rounds than break-action models, making it a favorite with many hunters. It's best known as the traditional long gun of law enforcement. Often referred to as the police riot gun, its compact size and awesome firepower have made it a favorite with police for many years.

The action
The pump-action shotgun works on the same principle as a lever-action rifle: once the weapon is fired, the shooter pulls back on the fore-end grip, sliding it back. This opens the chamber, ejects the spent shell and allows the shell-carrier to raise the next shell into the loading position. As the shooter pushes the fore-end grip forward, the bolt moves forward, pushing the new shell into the chamber. Once the chamber is closed, the shooter is ready for their next shot.

The stock & comb
The stock may be made of wood or a synthetic material. It provides three of the four points of contact between weapon and shooter: the butt, the comb and the grip. The butt rests on the shooter's shoulder. The comb contacts the shooter's cheek; this contact of the comb and the cheek is also known as the weld. The shooter's grip can either be high on the stock or on a pistol grip, allowing the shooter to grasp the weapon.

The safety may also be located on the top and rear of the weapon's receiver. This type of safety is usually a slide lever — again, it usually shows a red dot when the weapon is in the fire position. Always use caution; a weapon's safety is a mechanism, and it can fail.

The action release
The action release is usually a button that is either built into or in front of the trigger guard. This button allows the action to be opened. It is used to either verify that a weapon is empty or to unload the weapon.

The tubular magazine
The pump-action shotgun has a tubular magazine that runs parallel to the barrel. The magazine's length will vary depending on the quantity of ammunition the weapon can legally hold. Some police riot guns have magazine extenders that are as long as the barrel, holding five or more rounds. 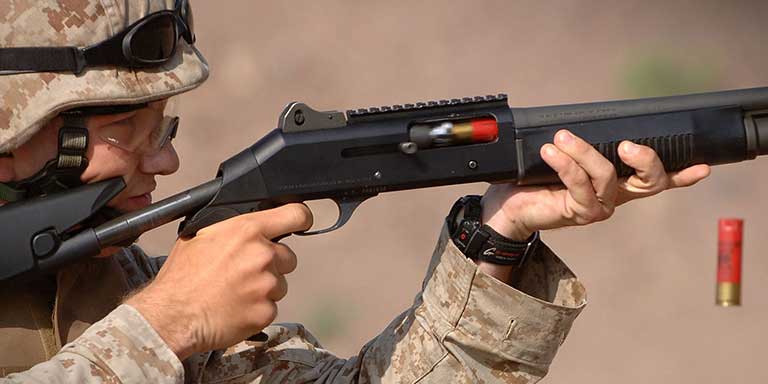 The semi-automatic shotgun is the most popular shotgun for hunting and has gained popularity with law enforcement. The simplicity of its operation and the sheer speed of its second and third shots far outpace other shotguns. Once loaded and charged, the shooter can fire the weapon as fast as they can pull the trigger until the magazine is empty.

The action
This weapon's operation is similar to a semi-automatic rifle. When it is fired, the bolt is forced rearward under spring tension, both extracting and ejecting the spent shell. The compressed spring then forces the bolt forward. The shell carrier elevates a fresh shell from the magazine tube. The bolt then pushes the shell into the chamber. This entire sequence only takes a second, after which the shooter is ready for their next shot. 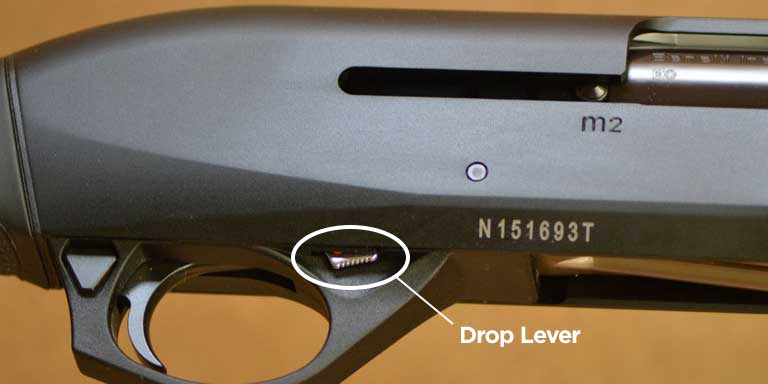 The Benelli does not cycle a shell into the chamber by pulling and releasing the charging handle as most other semi-automatic shotguns do. A drop lever button must be depressed first; then the weapon can be loaded by pulling the bolt handle to the rear and releasing it. It's important for the shooter to read the owner's manual and learn the proper operation that is unique to their weapon.

Shotguns serve many purposes, including military and law enforcement applications, hunting, home defense and competitive shooting. Choosing the right shotgun will depend on its intended purpose and the shooter's preference. In the hands of a practiced and skilled shooter, a shotgun is a formidable weapon.