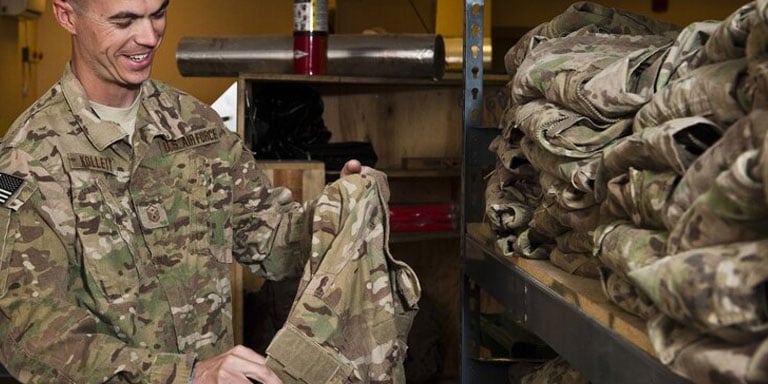 Don't have the desire to flip through pages of tedious regulation? We got your six. Soldiers, airmen and Space Force service members can consult this guide for everything you need to know about the uniform required for each branch. The Army moved to the OCP uniform in 2015, with the Air Force following suit soon after. Shortly after the creation of the U.S. Space Force, its adoption of the uniform was also announced. From coats and pants, to accessories and boots, we outline OCP uniform components that are approved and ready for battle.

In 2020, a hot-weather OCP uniform design was finalized for wear in extremely hot or wet conditions. Made from a 57/43 nylon-cotton blend, the improved hot weather combat uniform (IHWCU) is a softer, lighter, more breathable fabric than the original uniform. It’s engineered to dry quickly and perform better in the heat.

There are other notable differences, including streamlined cargo pockets, button-flap closure shoulder pockets, and most noticeably, the absence of chest pockets. Uniform officials finalized the design after extensive research and post-combat feedback from soldiers.

The thread color of name tapes, rank and American flag patches are specific to each military branch utilizing the uniform: black for Army soldiers, spice brown for Air Force and blue for Space Force service members. These can be either Velcro or sewn on— however, they must all be affixed in the same manner. Airmen and Space Force members may purchase name tapes with hyphens and accent marks to accurately reflect the spelling of their names. All three branches use a three-color OCP pattern on their name tape and rank insignia.

Both Army and Air Force use the same patch configurations with officers and enlisted both wearing rank insignia in the middle of their chests. Airmen no longer wear their rank insignia on their sleeves or collars. Airmen also now have their last names on the back of their patrol caps.

For the Air Force, the change to OCP also brings a "sleeve swap." The squadron patch is now on the right sleeve along with the U.S. flag and the higher headquarters patch moves to the left sleeve. 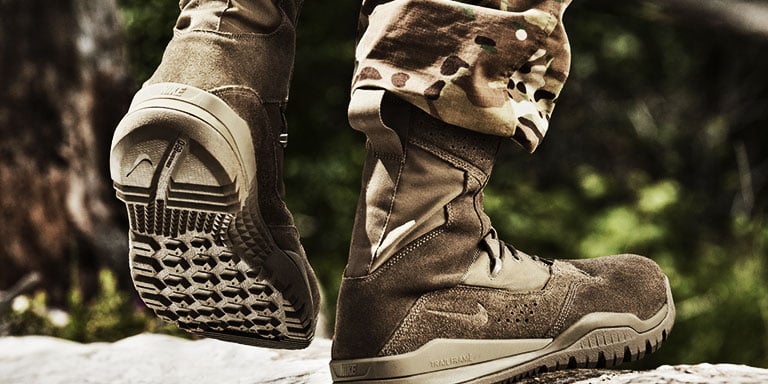 Dark, stain-hiding and more effective at providing concealment than the lighter desert tan boots, coyote brown boots were adopted in conjunction with the announcement of the new OCP uniforms. Both Army and Air Force OCP boots must be in the approved, darker colorway, as well as eight inches high with a leather upper and full-rubber outsole. To comply with AR 670-1, soldiers' boots cannot have a safety toe or side zipper. Unlike the Army, the Air Force AFI 36-2903 regulation allows for both a safety toe and a side zipper. Commanding officers have the final say on which boots can and cannot be worn. Learn more about how to choose military boots. Shop OCP Uniform Boots

Boot blousing is a very important aspect of the OCP uniform (and is often required). Blousing provides a clean, professional look and prevents dust, grit and insects from entering your boots. Some uniform pants styles come with blousing straps, but you can also purchase blousing bands separately to make the process easier. Our video on how to blouse military boots will help you perfect your blousing technique. 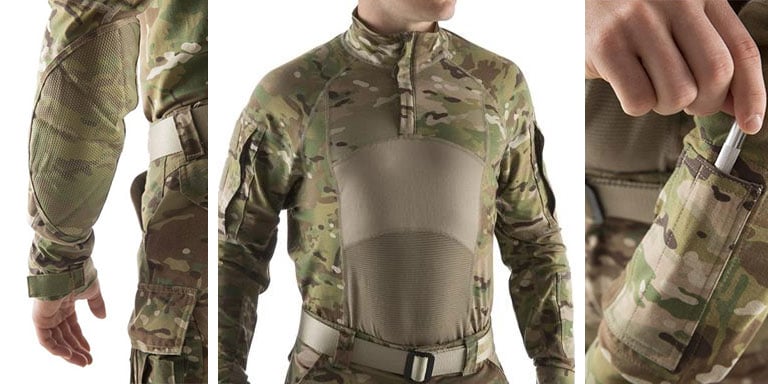 In 2015, the Army updated the combat shirt to coincide with the transition to OCP uniforms. The new version, known as Combat Shirt Type II, boasts more camouflage coverage on the sides and chest. Shop OCP Uniform Combat Shirts 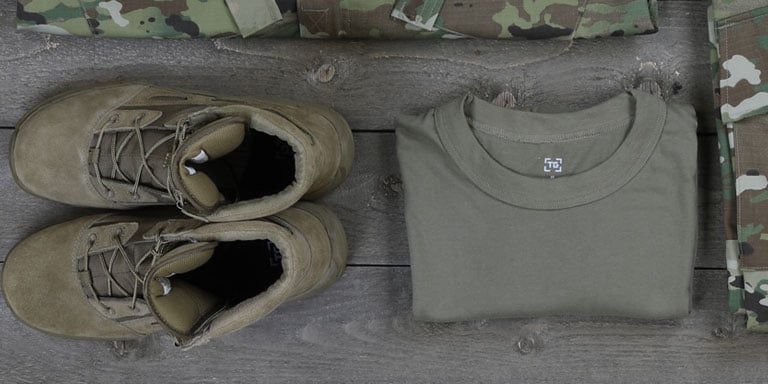 The operational camouflage pattern is darker than previous combat patterns and requires a complementary base layer. The Army opted for a tan 499 t-shirt, which is slightly darker than the previous sand shirts. The Air Force requires an even darker coyote brown t-shirt. Both branch regulations call for a crew neck, short-sleeve style. Shop OCP Uniform T-Shirts

In June 2021, the Air Force authorized the wear of tactical caps in the operational camouflage pattern. Prior to this announcement, only airmen deployed to the US Central Command area of responsibility (including the Middle East and Central Asia) were permitted to wear baseball style tactical caps while in uniform.

This authorization took immediate effect across the service and includes strict regulation for the style of the cap. Caps worn with the OCP uniform must be entirely made from the operational camouflage pattern, or with a coyote brown mesh back. OCP name tapes with spice brown thread can be sewn-on to the back of the cap or affixed with Velcro.

The new regulation does not allow Velcro or any loop field on the front of the cap unless worn by an officer. In addition, officers are only allowed to wear their rank symbol on the front of the cap while chaplains may wear a chaplain occupation badge. Previously popular hat decorations, such as subdued American flags or morale patches are not authorized. 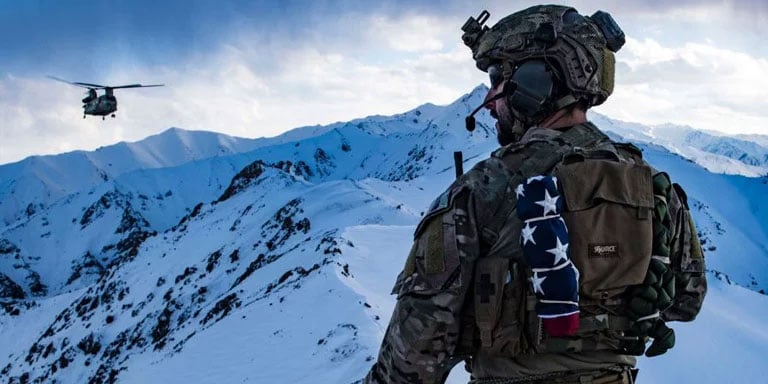 Army
The Army has yet to incorporate OCP with its Organizational Clothing and Individual Equipment (OCIE) so there is no requirement for these items to be the same camouflage pattern as the uniform being worn. This includes cold-weather gear such as fleeces, soft shells, and the Extended Climate Warfighter Clothing System (ECWCS). Any item normally issued from the CIF is permitted for wear, with no restriction based on camo pattern or color.

ECWCS is a layer-based apparel framework made for moderate to sub-zero climates. Through extensive development, the ECWCS has multiple generations: ECWCS Gen I, II, and III. The most sophisticated version of the system, Gen III is authorized for wear. This system incorporates a baselayer, a midweight baselayer, a fleece, softshell jackets and pants and a heavier parka and pants.

Air Force
The Air Force previously used the All Purpose Environmental Clothing System (APECS) for cold-weather climates (outdoor use only). With the transition to OCP, airmen may now wear the Extended Cold Weather Clothing System (ECWCS) in the operational camouflage pattern. Mixing and matching of ABU or OCP cold weather clothing with the ABU or OCP uniform is prohibited, with the exception of the Level 7 Parka Jacket. 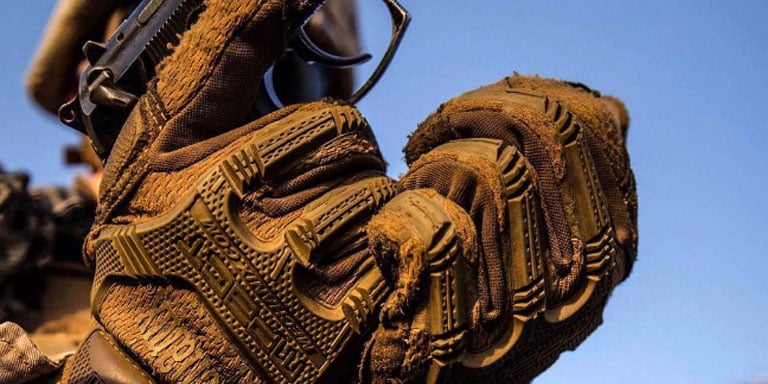 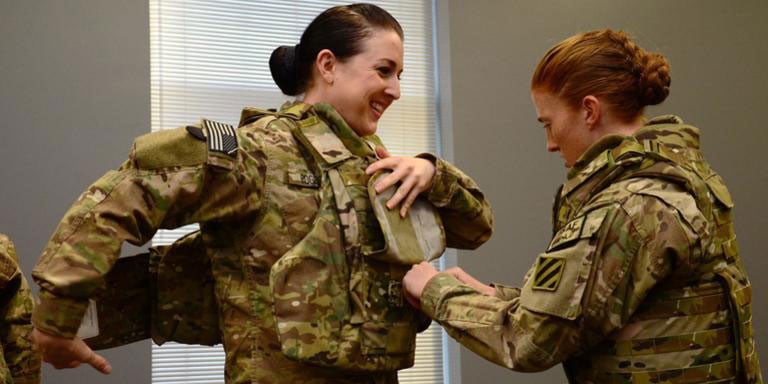 For decades, women in the armed forces had to settle for uniforms designed for men, just in smaller sizes. This is not the case for the OCP uniform. It's available in female designs cut with more room in the hips and legs with a more tailored coat. The OCP uniform is also available in maternity sizes, available at both Army and Air Force Exchange Stores. Shop Women's OCP Uniforms 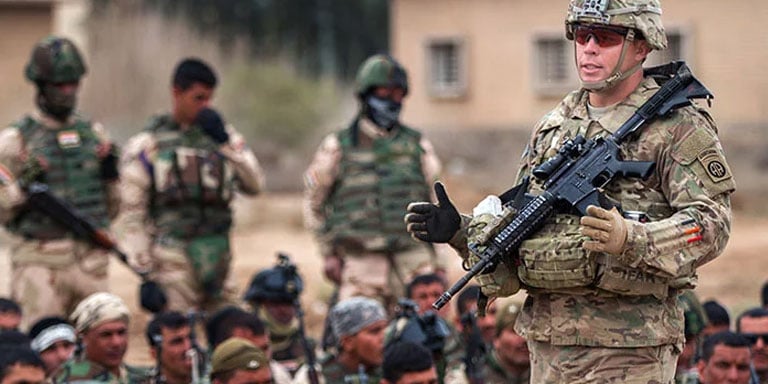 On July 31, 2014 the Army officially announced that a new camouflage pattern, known internally as Scorpion W2, will be named the Operational Camouflage Pattern (OCP). Not only did this new pattern replace MultiCam, which acted as the OCP until 2015, but it also replaces Universal Camouflage Pattern (UCP) as the official uniform pattern. For more than a decade, the Army has relied on the widely unpopular UCP as the official standard-issue pattern. Along with the camouflage update, the uniform construction, accessories and footwear were also changed.

The Air Force followed suit with an announcement made Monday, May 14, 2018 that the branch would be replacing the digital tiger stripe Airman Battle Uniform (ABU) with the OCP uniform. Shortly after the creation of the U.S. Space Force, its adoption of the uniform was announced January 17, 2020.

Construction changes were also implemented with the release of the new OCP uniforms. 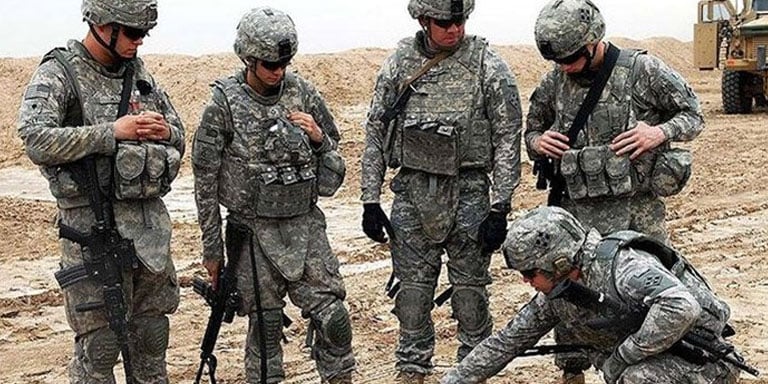 Camouflage Field Testing
In 2002, the Army began the Universal Camouflage Trials in order to choose a pattern for the new Army Combat Uniform. In 2004, it selected Universal Camouflage Pattern (UCP) as the official standard-issue pattern. The decision has been widely unpopular with Soldiers who claim the pattern yields poor results in most environments.

Only a few years after selecting UCP, the Army began looking for a new design. In 2009, congress responded to Soldier's concealment concerns by passing a bill requiring that the Department of Defense "take immediate action to provide combat uniforms to personnel deployed to Afghanistan with a camouflage pattern that is suited to the environment of Afghanistan." 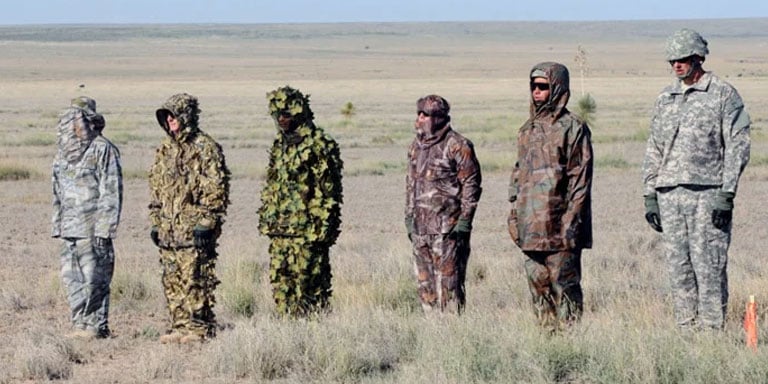 The Army began a four-phase research and testing process to find a new pattern. In the meantime, MultiCam was recommissioned, replacing UCP for troops deploying to the War in Afghanistan. The Army's extensive camouflage testing includes photo simulation and actual field tests designed to determine effectiveness. At the end of the field testing, Scorpion was named as the winner and adopted as the new operational camouflage pattern.