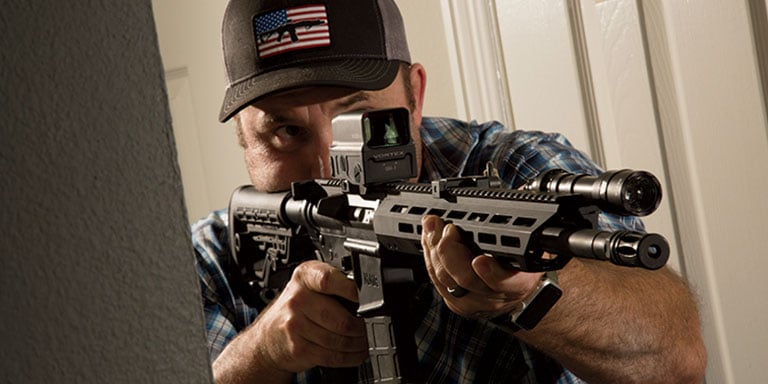 The best gun for defending your home depends mostly on two factors: what you're comfortable using and what's tactically advantageous given the layout of your home. Generally, handguns and shotguns are best for home defense. Rifles are long-distance weapons and are somewhat less effective in close quarters, but they can still make excellent home-defense guns under certain conditions.

In this guide, we'll introduce the most important considerations for choosing a home-defense firearm and recommend our favorite models. 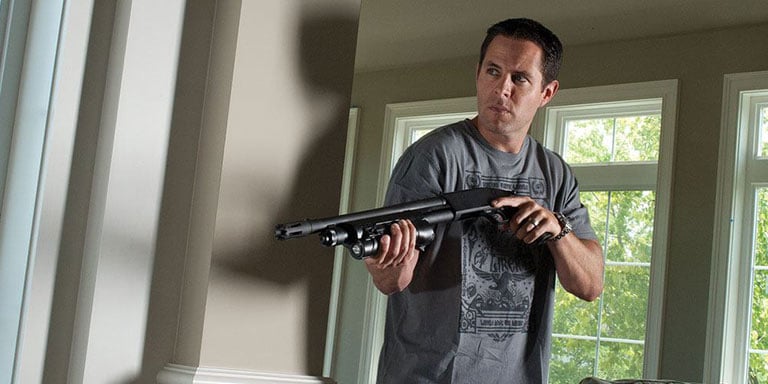 When it comes to calibers, bigger is generally better, but there are many other factors to weigh. For instance, larger-caliber firearms incapacitate attackers more effectively but hold less ammunition. If someone breaks into your home, you probably won't be wearing extra ammo pouches, especially in the middle of the night. The rounds in your weapon may be the only ones you have quick access to.

Also consider which calibers and types of firearms you can shoot safely, quickly, and accurately. A smaller gun that you can shoot with confidence is more effective for home defense than a big gun you struggle to control. 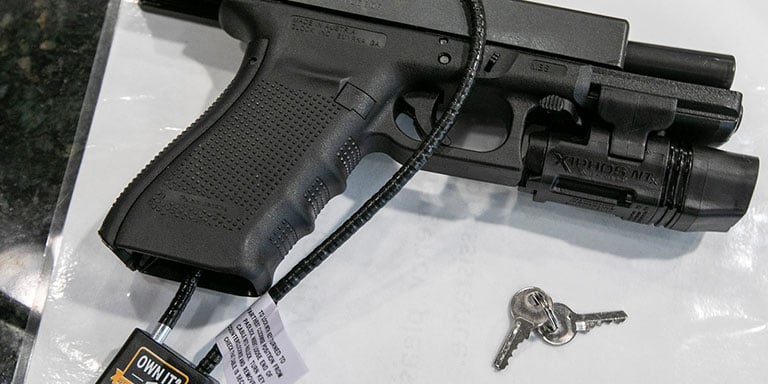 Even if you hit the range every weekend, it's critical to train for the specific situations you want to be prepared for. Fending off an intruder in the dark just moments after you've been jarred awake is nothing like shooting at paper targets while you're alert and focused. Practice finding, loading, unloading and mock firing your home-defense weapons late at night. If you want to get really serious, do drills immediately after you wake up in the morning to simulate interrupted sleep — but use Snap Caps or training barrels to be on the safe side.

Conduct a thorough survey of the layout of your home and think about the directions in which you're likely to be shooting in a home-defense scenario. Also, think about the position, distance, and layout of your neighbors' homes. Bullets — especially big ones — aren't always stopped by walls. You could be criminally or civilly liable if you accidentally shoot an innocent bystander while defending your home. You may want to choose a weapon less prone to overpenetration, particularly if there aren't many obstacles between you and your neighbors.

For shotguns, #4 buckshot tends to be a good choice for home defense. It's powerful enough to drop an attacker quickly but less likely than the more common #00 buckshot to penetrate walls. Hollow-point rounds for pistols and rifles fragment on impact and the fragments quickly lose velocity, so again, they're less likely to overpenetrate. Most rifle rounds travel significantly faster than pistol or shotgun rounds, so overpenetration is, by nature, harder to avoid. Choose a rifle for home defense only if there are no neighbors or family members in any potential line of fire (or at least go with a smaller caliber). Remington 62gr Ultimate Defense and Federal 64gr Power-Shok SP, for instance, are .223 rifle rounds designed to minimize overpenetration.

Finally, give some careful thought to where and how you'll store your home-defense weapons. You'll want to strike a balance between safe storage and quick accessibility. If you live alone, or with another responsible gun owner, it's generally okay to store your firearms in a drawer or closet. If you have children, though, the equation becomes more complicated. Investigate biometric gun safes or wall racks that can keep your guns out of little hands without significantly slowing your access to them. Remember always to keep firearm safety in mind.

In any event, never store a firearm in condition red unless the entire trigger is completely covered by a hard-sided case or holster. As a quick reminder, the four weapon states are:

Home-defense needs vary widely, so we've assembled a diverse roster of our favorite shotguns, pistols, and rifles for that purpose. We chose these guns primarily for their reliability and ease of operation — two characteristics you'll definitely appreciate if you ever have to fight back against an attacker at night. 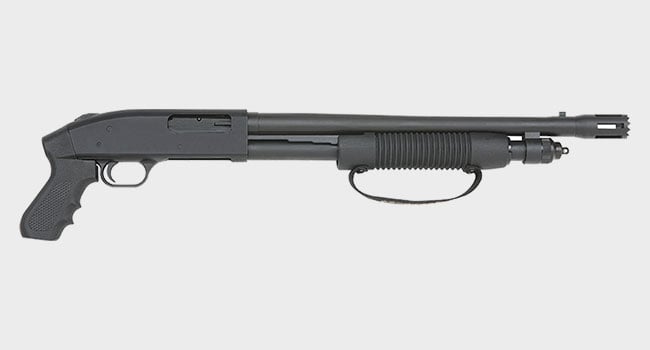 The Mossberg 500 series of shotguns is one of the two most popular lines in the world, and for good reason. The 590 Cruiser is affordable, reliable, and highly customizable — many companies produce a wide selection of rails and accessories for this beloved pump gun. The 590 is more mechanically complicated than its spiritual twin, the Remington 870, but even so, it's pretty easy to operate, disassemble, and clean.

This shotgun generally comes with a pistol grip for increased maneuverability indoors, but there are plenty of affordable aftermarket stocks to choose from if you'd prefer. If you'd like to make it even smaller and more maneuverable, you can get a 2+1 capacity version from Serbu Firearms that's just 16.5" long in total — provided you're willing to wait nine months for the ATF to issue an AOW stamp. 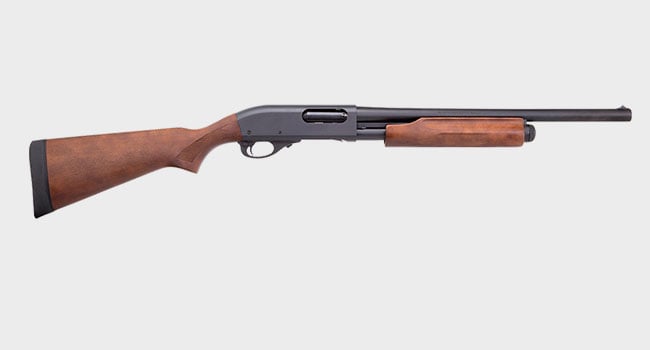 The Remington 870 (the other most popular shotgun in the world) is ruggedly straightforward. It has fewer moving parts than the Mossberg Cruiser, which makes it slightly less prone to malfunctions. It's also much easier to disassemble and clean.

Most likely, whether you prefer this pump gun or the Cruiser will come down to your preferences on length, weight, and capacity; the 870 is larger in all respects. Serbu makes a super-short version of this shotgun as well, which costs $50 more than the Mossberg 500 variant but holds one additional 2 3/4" shell. 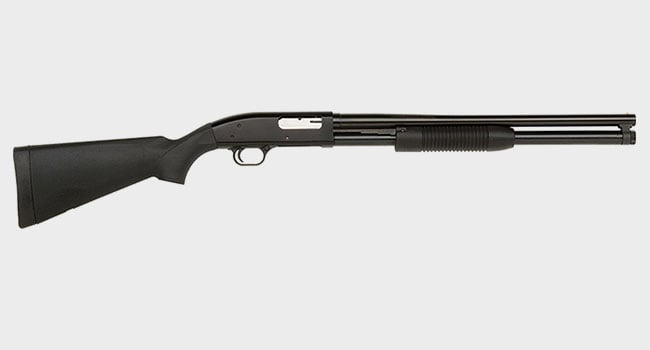 Want a rock-solid pump shotgun for under $250? Mossberg subsidiary Maverick Arms makes a line of shotguns very similar to its parent company's 500 line. Many parts are even interchangeable between the two product families.

Functionally, the Maverick 88 is very nearly identical to anything in the Mossberg 500 line. Overall, the Maverick 88 is more basic and lacks some of the 500's minor features, such as swivel mounts and a pre-drilled and tapped receiver for scope mounts. The finish is also a bare-bones steel bluing, as opposed to the nickel or parkerized finishes you'll find on most 500s. If you don't mind these small differences, the Maverick 88 is an excellent pump gun at an unbeatable price. 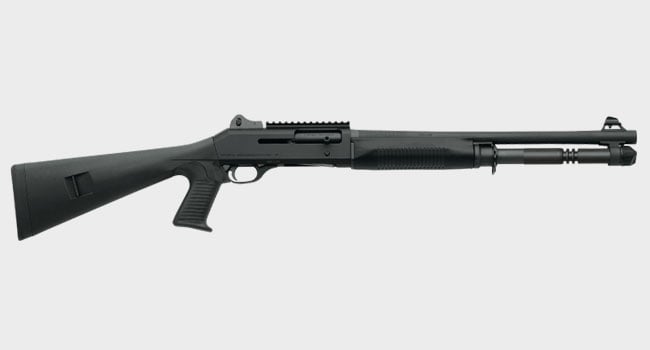 If you're looking to get rid of a lot of extra cash, semi-automatic shotguns are a good way to do it. The Benelli M4 is widely lauded as one of the best on the market, and it makes frequent appearances at competitive shooting events, particularly 3-gun matches.

The main advantage that a semi-automatic shotgun has over its break and pump-action brethren is, of course, a superior rate of fire — especially useful when engaging multiple targets. The M4 has another distinct advantage in home-defense scenarios: not having to work the action manually means one less thing that you have to focus on during a tense, adrenaline-fueled situation. 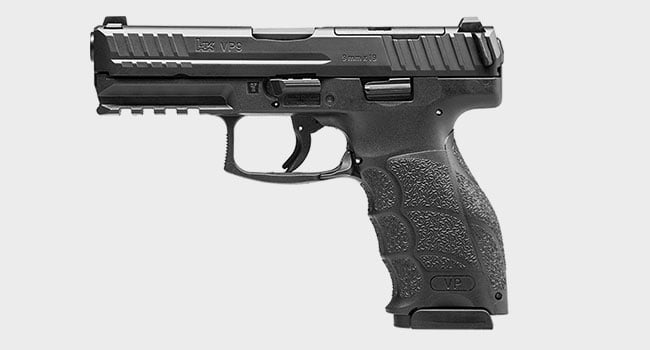 If the 9mm round has a drawback as a home-defense caliber, it's that it will likely take multiple shots to fully incapacitate an attacker. However, the VP9 is exceptionally easy to fire both quickly and accurately, even for relatively inexperienced shooters, leaving it with few or no drawbacks as a nightstand gun.

Many well-built .357 revolvers under $600 tend to be small, which often also means that they're difficult (and sometimes painful) to shoot. As a home-defense gun, though, a .357 doesn't need to be small. In fact, a bigger and heavier frame is better — it will soak up some recoil and make the weapon easier to control.

The Taurus Model 66 is a 7-shot, foot-long Magnum with a smooth, medium-weight, double-action trigger pull. It comes with textured synthetic grips, which may not be as pretty as wood, but they do make the revolver a bit easier to hold onto. If you want top-tier stopping power with a mid-tier price tag, look no further. 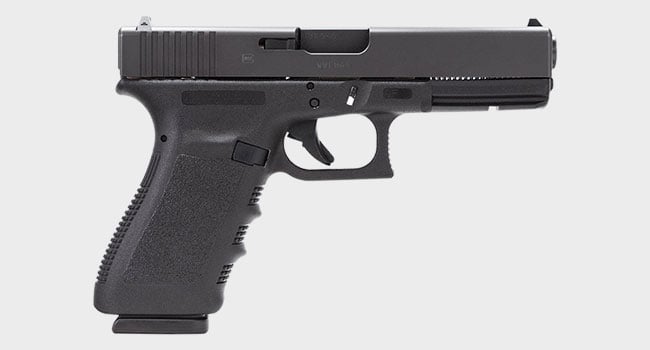 Inside your home, where an attacker can close distance in a fraction of a second, stopping power is critical. The large .45 ACP cartridge offers plenty of that — enough to stand in as an approximate substitute for a .357 Magnum or 12-gauge shotgun.

If the fourth-generation Glock 21 has a flaw, it's that it's 1.34" wide — a bit large for small hands to hold comfortably. In exchange, though, you get enough space in the grip to accommodate a 13-round, double-stack magazine. And, of course, the G21 is as supremely reliable as every other Glock; many owners report firing 5,000 rounds or more without a single malfunction. 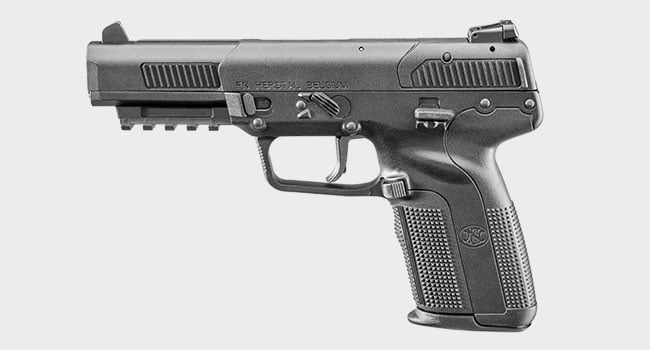 If you've heard of the FN Five-Seven, you've probably heard that it uses armor-piercing ammunition, which is generally a bad thing for home-defense weapons. It's true that the Five-Seven was originally developed to use AP rounds, but these rounds are illegal for civilians to own in most places. Civilian-legal 5.7mm ammunition does not pierce armor, although it still has a slightly higher tendency to overpenetrate than many other small and medium-caliber pistol rounds.

Provided you account for that, the Five-Seven's stellar ammunition capacity, low recoil, light weight, ambidextrous operation, and ease of use make it a great pistol to keep in your nightstand drawer. If you're not looking to spend a whole lot on a handgun, consider Ruger's more budget-friendly take on the Five-Seven design, the Ruger 57. 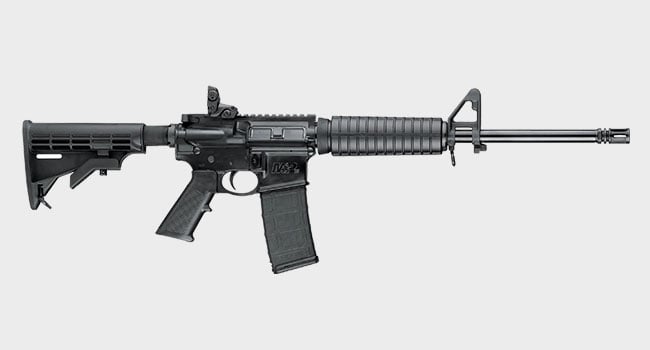 AR-15s can get expensive quickly. Knowing this, Smith & Wesson offers a no-frills, budget-friendly 5.56/.223 rifle built for the essentials of home defense. Its 16" barrel makes it a little easier to use indoors than the standard 18" barrel, and the 5.56 round is tried and true when it comes to stopping power; just be wary of overpenetration.

The M&P 15 Sport II is manufactured specifically to fire the less expensive .223 cartridges as well, making range time a little easier on your wallet (all 5.56 rifles can fire .223, but some handle it better than others due to slight differences in how the two rounds are manufactured). All in all, this is one of the best sub-$1,000 AR-15s on the market. 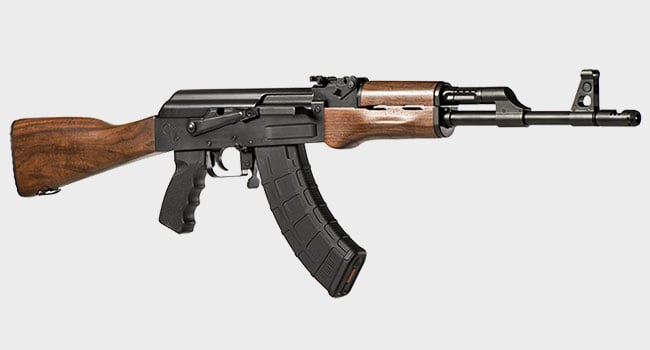 7.62 consistently ranks among the three most popular rifle calibers in the world. It's a little less accurate than a 5.56 or .223, but it hits much harder, and for a home-defense weapon, the lost accuracy is usually negligible. The C39V2 from Century Arms makes a superlative bedside rifle as long as overpenetration is not a serious concern.

Like the M&P 15, the C39V2 has a shorter-than-average barrel that makes it easier to wield in close quarters. It also comes with flip-up sights and a few other nice features most commonly seen on more expensive rifles. The C39V2 is compatible with most aftermarket AKM parts, and it has a proprietary side rail that mitigates a problem common to many 7.62 rifles: scopes and lasers being knocked off-center by recoil. Overall, this is a fantastic home-defense AK, especially considering its price point.

Stay Safe at Home and Elsewhere

If you're on the fence about whether to buy a pistol, shotgun, or rifle, check out the case for why you should use a shotgun for home defense. And your list of preferences and requirements for a home-defense gun is probably different from what you want in a daily-carry weapon, so take a moment to browse our guide to the best CCW handguns, too.