How to Find Water in a Survival Situation 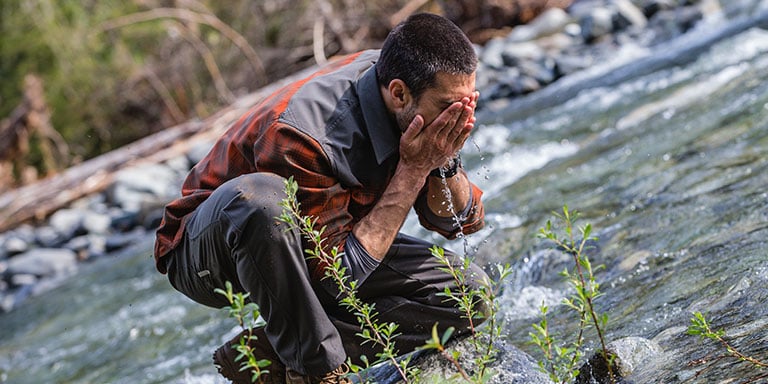 When you're far from civilization, mind the "rule of threes:" Humans can survive for roughly three minutes without oxygen, three hours without basic shelter in hostile environments, three days without water, and three weeks without food. In most cases, the weather is unlikely to be fatal within hours, so finding water should be your first priority.

Of course, the best methods vary depending on what part of the world you're in, the time of year and the equipment you have at your disposal, if any. There are a few broad principles, though, that apply to most survival situations.

Never Drink Untreated Water (If You Can Help It) 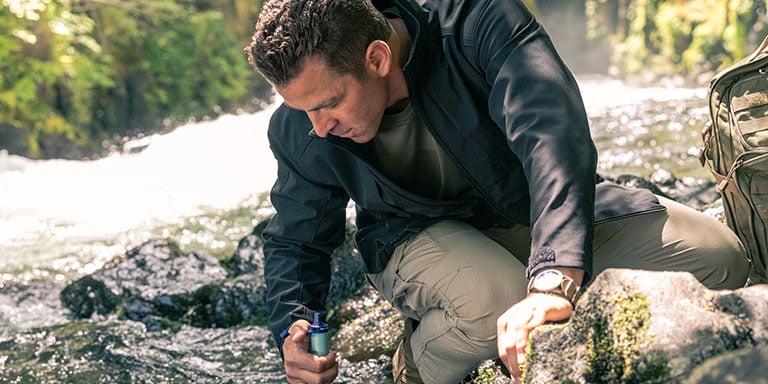 Broadly speaking, nature is nice, but many people romanticize it to the point of inviting disaster. Nearly all untreated surface water on the planet contains bacteria, viruses, parasites, or other contaminants that can cause cramps, diarrhea, and other ailments that will make your situation much worse. Most wild animals that drink from these sources have evolved over eons to resist such contaminants, but human immune systems aren't so robust.

Although drinking untreated surface water is preferable to dying of dehydration, that's pretty much the only thing it's preferable to. Whenever possible, filter, boil, or chemically treat water before drinking it. These steps can be time-consuming, and it can be awfully tempting to skip them when you haven't had a drink in a day or two, but unless you're pushing that three-day mark, take the extra time to treat your water.

Rainwater and groundwater aren't as pristine as the bottled water you buy at the supermarket, but they tend to be less likely than surface water to make you sick. Saltwater is always a no-go for drinking unless you desalinate it, which requires time and equipment that you aren't likely to have in a short-term survival situation. And, unless you're truly desperate, avoid standing water that you find in caves and in other dark, still places where it may have been stagnating for years. It's often difficult or impossible to treat such water thoroughly enough to make it safe to drink.

Finding Water in the Wild 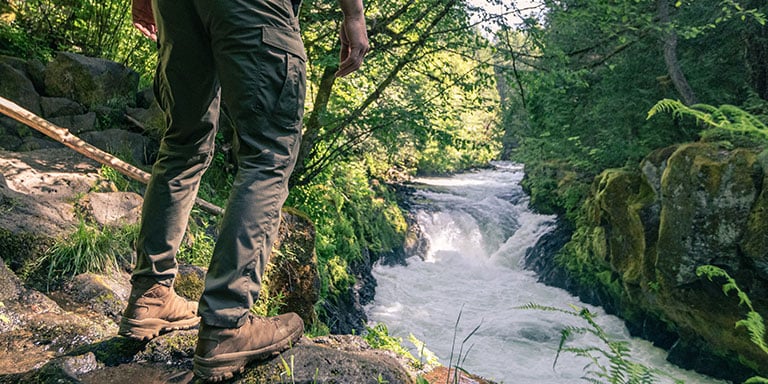 The world is broadly divided into six zones with respect to the general climate: tropical, moist subtropical, moist continental, dry, polar, and highlands. We'll cover some general water-finding strategies that are applicable to most or all of these zones, then go into more detail about climate-specific tactics. 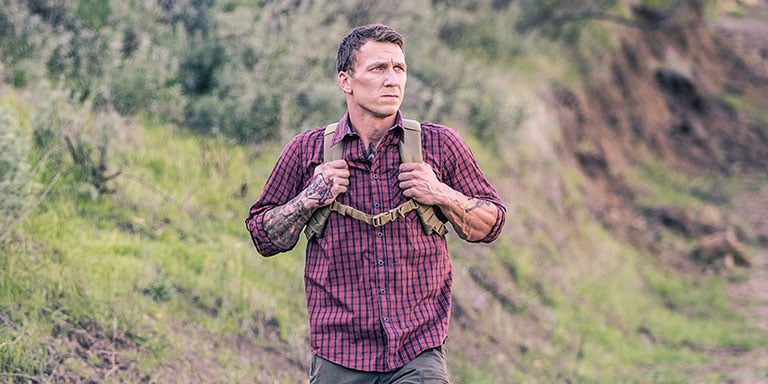 No matter where you are in the world, water always flows downhill and along the path of least resistance. Look for canyons, ravines, dry riverbeds, and smaller telltale signs that water has flowed along a certain path for a long time; in many cases, it still does. Follow these tracks to their lowest points and look for water there, as well as in irregular depressions along the way.

It's always a good idea to keep an eye out for animal tracks, insect swarms, and birds, any of which might indicate the presence of a large water source nearby. You might also search for soft, moist ground, which could mean that there's water just below the surface. 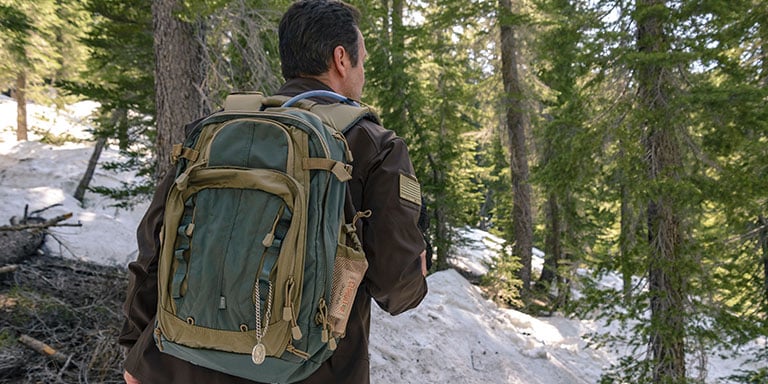 Moist continental zones cover places like the northernmost U.S. states, the southern regions of Canada, and parts of Europe, including the United Kingdom. These places have cool summers and cold winters, often with several feet of snow.

During the winter, snow and ice can be abundant sources of water, but both should be boiled before drinking. When possible, use ice over snow; ice is denser, meaning that you'll get more usable water compared to the same volume of snow. Ice is also less likely to contain large amounts of mud and other debris you don't want to drink.

Never eat snow or ice, even (and especially) if you are dehydrated. It takes a lot of energy and body heat for your stomach to process ice-cold liquid — energy and heat you can't spare when you're outside in the cold for long periods. If you lack the tools to boil snow and ice, at least melt them first.

In spring, summer, and fall, your best bet is usually to search out (or follow animals to) rivers, lakes, and other large bodies of water, which tend to be common in these regions. If it's rainy, feel free to collect rainwater. Rain accumulates dust and dirt as it falls from the clouds, and it may taste funny. Filter or boil it if you can, but it generally won't make you ill if you must drink it untreated. 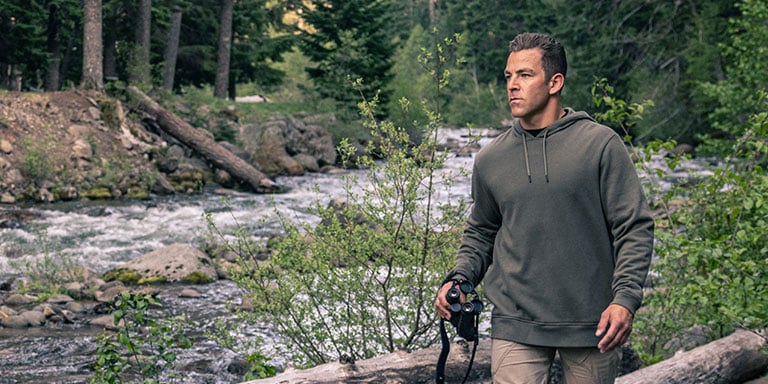 These regions extend from roughly thirty to fifty degrees north and south of the equator. Summers tend to be warm and humid, whereas winters are mild. For the most part, strategies for finding water in these areas are the same as those you would employ in moist continental regions. Snow is generally rare, although rain is more or less equally prevalent year-round.

Finding Water in the Desert 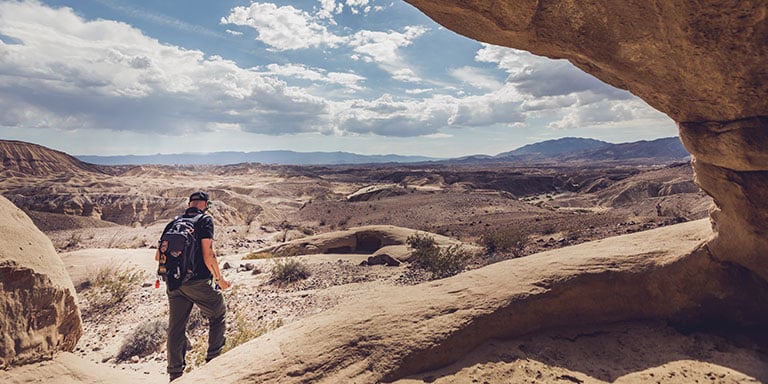 By definition, deserts are where water — particularly rain — is rarest. Although efficient collection and use of water is crucial in any survival situation, it's most critical in the desert, where you may have to ration your daily water intake far more than is ideal.

In most deserts, you shouldn't bet on finding lakes or rivers. They exist, but, statistically speaking, you're probably more than three days' walk from one. Don't waste your energy searching for lakes or rivers unless you see animal tracks, insects, or birds — some tangible sign that water is nearby.

Instead, focus on harvesting water from plants that are good at storing it, such as the fruit of the prickly pear cactus and the flesh of the fishhook barrel cactus (and only the fishhook; the water found in virtually all other barrel cacti will give you headaches, cramps, and other unpleasant symptoms).

If it's rained recently, you may find water in shallow depressions near trees such as mesquite and ironwood, which tend to grow in places where water pools. 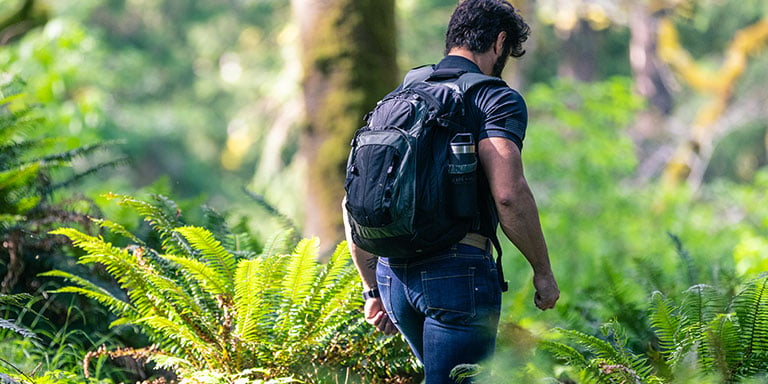 Tropical regions are those within about thirty degrees of the equator. Winters here are essentially nonexistent. It's warm and humid all year, with annual rainfall exceeding sixty inches. On average, there's so much rain that your chances of not being able to find rainwater within any given three-day span are slim.

Alternate sources of water include moisture from fish meat, tropical fruits such as bananas and kiwis and freshwater lagoons, which are often found within a few miles of the coast. 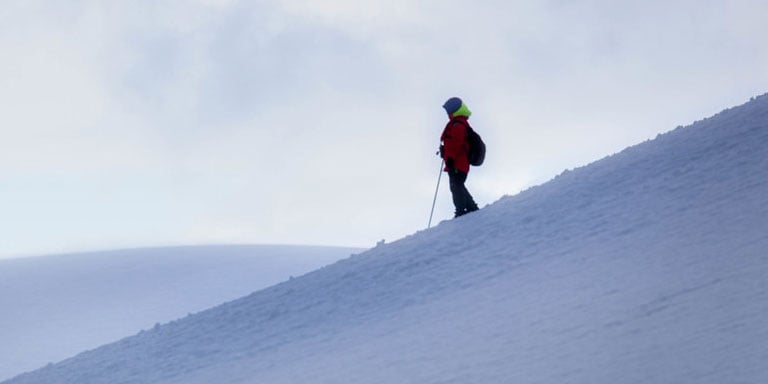 Paradoxically, the regions of the earth with the most water by volume are among the hardest to survive in, partly because the vast majority of that water is difficult or impossible to access. It's always winter in these areas, but at certain times of year, it may be warm enough for glaciers to melt and for streams to thaw.

If you can't find freshwater in its liquid form, melting snow and ice likely will be your best option. Vegetation with a high water content is rare or nonexistent, although you can get some moisture from fish if you can catch them reliably. Solar stills don't work if it isn't warm enough for water to evaporate, and digging in the tundra is often impossible without massive machines.

Finding Water in the Highlands 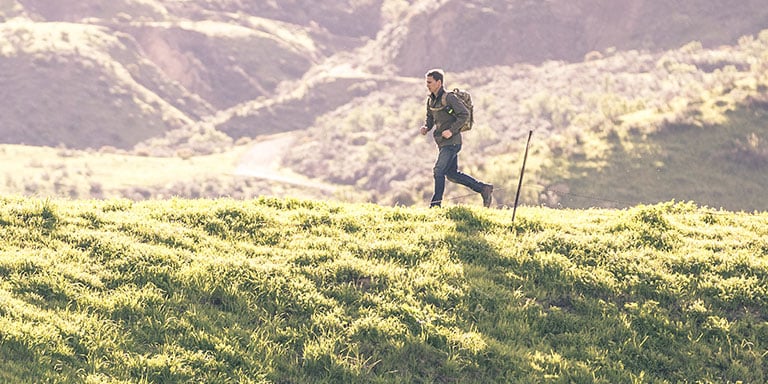 In a sense, hills and mountains aren't so much a type of climate region as they are vertical cross-sections of multiple regions. Within a single mountain range, you can often find areas similar in temperature and rainfall to desert, continental, and subtropical zones.

Many mountain ranges — even some of those in desert regions — hide hundreds of small lakes and streams. If you're a mile or more above sea level, look for the usual signs that a major water source is nearby. If you're high enough that there's snow, melt and boil it. And if you're at the base of a mountain range, walk parallel to it for a while. Sooner or later, you'll come across a stream that flows down from on high.

Crafting tools and basic machines for extracting water from your environment is a rich topic encompassing many creative strategies. We can't cover all there is to know in this article, but here are a few basic wilderness survival recipes you'll want to remember. 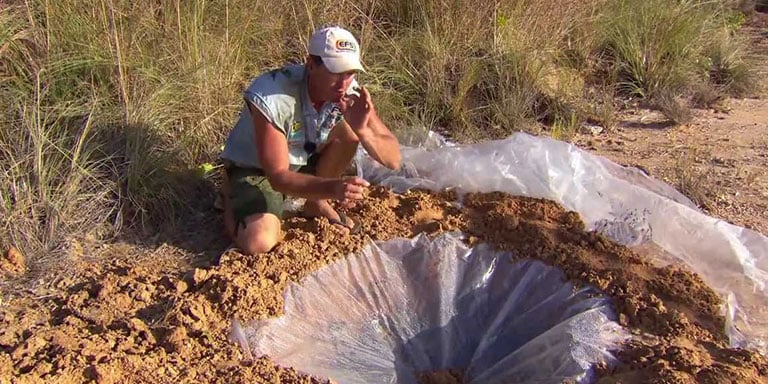 To make a basic still, you'll need a sheet of plastic wrap or nonporous fabric, some moderately heavy rocks (about two to five pounds each), and some sort of container in which to catch your clean water. Choose a location that's exposed to direct sunlight throughout the day and dig a hole roughly two feet across and two feet deep. Place the collection container precisely in the center and fill the rest of the hole about halfway with vegetation — the more moisture it contains, the better.

Next, cover the hole completely with the plastic wrap or non-porous cloth. Secure the edges with heavy rocks and minimize gaps as best you can. Then, place some dirt or a small rock on the center of the sheet directly over your collection container. The sheet should sag slightly.

All you need to do now is wait a day or two. The moisture in the vegetation and in the ground underneath it will slowly evaporate, condense on the sheet, gravitate to the center, and drip into the container. 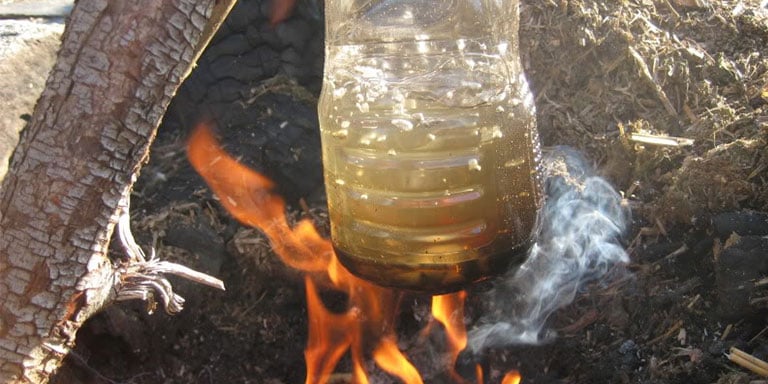 Believe it or not, you can boil water in an everyday plastic bottle. To do so, start a fire to a low flame and fill the plastic bottles about three-quarters of the way. Suspend each bottle about two feet over the fire with wire or string and wait for the water to boil. The bottles will deform, but they shouldn't melt or burst. If they do, the heat is too high or the bottles are too close to it.

Get the water up to a low boil and leave it there for a few minutes, then carefully remove the bottles and let them cool before drinking the water. Of course, boiling water this way leeches all sorts of less-than-ideal chemicals into it, but it's better than dying and won't cause any health problems if you only do it on an emergency basis. 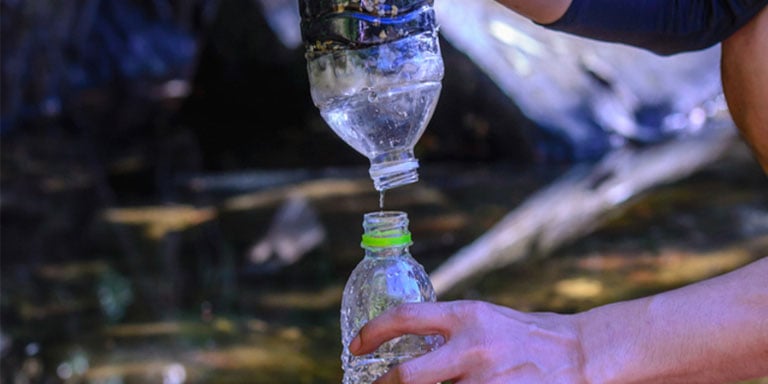 Establishing reliable access to clean water is one of the first steps in surviving outdoors, and its importance can't be overstated. Make it one of your first priorities and utilize the knowledge from this guide to find and potentially create clean, drinkable water.